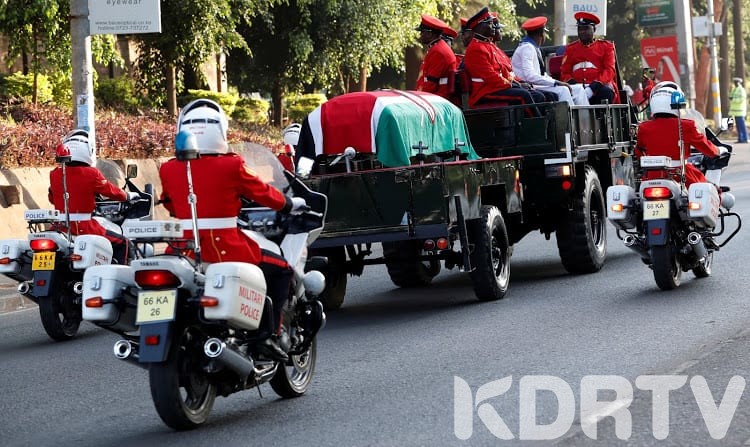 Kenyans Asked To Settle At Nyayo Stadium By 8am

(KDRTV)-Concerned authorities have asked Kenyans to be seated at Nyayo stadium by 8 am to attend state funeral service of the late Daniel Moi that will be held on Tuesday at Nyayo Stadium in Nairobi.

Government spokesperson Cyrus Oguna on Monday told the media that they expect around 30, 000 Kenyans to attend the state funeral service for the late ex-president Daniel Moi

According to the government spokesperson, the stadium will be opened at 7 am, with members of the public expected to be seated

“We expect around 30,000 people… We are asking Kenyans to be seated and be orderly as they pay their respect to the former head of state,” said Oguna.

It is confirmed that by Monday 18 delegations among them are seven Heads of state who will attend the service.

It is reported that at least 210, 000 people turned up to view the late Mzee Moi`s body at the parliament buildings

The late president Moi will be laid to rest on Wednesday, February 12 at his home in Kabarak in the state burial service which will be held privately

The late president Moi who served as president for 24 years succumbed to a long-termed illness on Tuesday, February 4 at the Nairobi Hospital