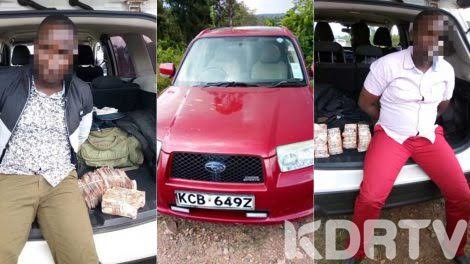 The money Heist orchestrated two days ago involving G4S Guards and alleged robbers masquerading as police officers has finally hit a dead end after investigations led to an arrest of two.

The heist saw to it that Sh.72 Million was stolen after six guards in charge of transporting money to Standard Chartered Automated Teller Machines in Nairobi West affirmed to the happening of the incident.

Detectives commenced an investigation that has led to an arrest of two police officers in Kisii and Kendu Bay in possession of Sh.7 Million.

“Detectives have arrested two police officers who are suspected to have taken part in the robbery and recovered Sh.7 Million together with a vehicle in Kisii and Kendu Bay,” said the DCI.

Initially, it was Constable Chris Ayienda who was found in possession of Sh.4 Million in Kisii and upon further questioning he unveiled his accomplice Constable Vincent Owuor in Kendu Bay who was also arrested with Sh.3 Million in cash.

Ideally, a brand new Subaru Forester was discovered alleged to have been purchased by the stolen money.

According to the information received, the two had planned to relocate to Uganda with the stolen money and start a new life until things got calmer.

The DCI has been very particular about the theft and robbery with intensified search and investigations.

Two more suspects were arrested yesterday after the G4S vehicle believed to have been used in the robbery was found located in their garage.

The suspects claimed they had no idea who parked it there, although they were taken in to be arraigned next week on Monday.

“We found the G4S vehicle parked in the garage belonging to two suspects. We questioned them but they denied any dealings with it. We have however taken them in to await being arraigned on Monday,” said a police officer.

The events leading to the heist brought a lot of unanswered questions, with majority of social media users aligning it to an inside job.

It was not the first time such kind of theft has taken place in our financial institutions, but this was orchestrated and planned in the open. It was less complicated as no under tunnel holes were dug nor violence involved.

The suspects are always nabbed within 72 hours, and just like the other cases, part of the money is often recovered and the case goes into silence.

Police detectives on Monday revealed that 13 empty cash boxes were recovered in Thogoto Forest, Kikuyu that were believed to have been used in the transportation of the cash.

Although more investigations are still conducted, the puzzle has been hacked and it is only a matter of confessions before everything is unveiled.