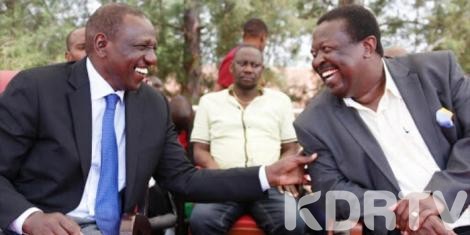 (KDRTV) – ANC leader Musalia Mudavadi has now stated that he is ready to work with Deputy President William Ruto and other like-minded politicians ahead of the 2022 elections.

Speaking to the Standard Digital, Mudavadi said that he is tired of being told he is working with the DP and he is at liberty to work with anyone. He, however, clarified that he will only work with Ruto on condition that the DP supports his presidential bid.

“I am at liberty to work with anyone who has the same aspirations as ours, including the Deputy President and other likeminded leaders. We are tired of being told that we are working for William Ruto. Let me say that we welcome Ruto as long as he supports our bid for the Presidency,” Mudavadi said.

Amani National Congress leader Musalia Mudavadi has said he is ready to work with Deputy President Wiliam Ruto on condition he endorses him for the presidency. pic.twitter.com/OqiJRKv0DZ

Mudavadi and his Ford Kenya counterpart Moses Wetangula have been rumoured to be working with the DP for the past few months. In fact, this is the reason COTU Secretary General Francis Atwoli has been working to whittle down their influence in Western Kenya. Wetangula is facing ouster from Ford Kenya while Musalia has lost his position as the Luhya spokesperson.

Kakamega Governor Wycliffe Oparanya and Devolution CS Eugene Wamalwa have emerged as the new kids on the block in Western Kenya. The two are pro-handshake.