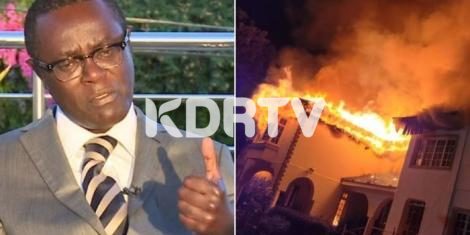 Political analyst Mutahi Ngunyi was allegedly found by first responders in his car drunk as his house in Runda burned down to ashes, Digital strategist Dennis Itumbi claims.

The political analyst who has lived in the house for 27 years took to social media, saying that the house broke into flames at around 1:45 am.

Itumbi took to his Twitter account notifying the Nairobi  Metropolitan Services (NMS) about the incident, further telling Mr. Ngunyi that: “I can only pray that you suffer the least damage and be safe.”

Itumbi further claimed that the analyst was found in his car drunk just outside his home as the house burnt down. 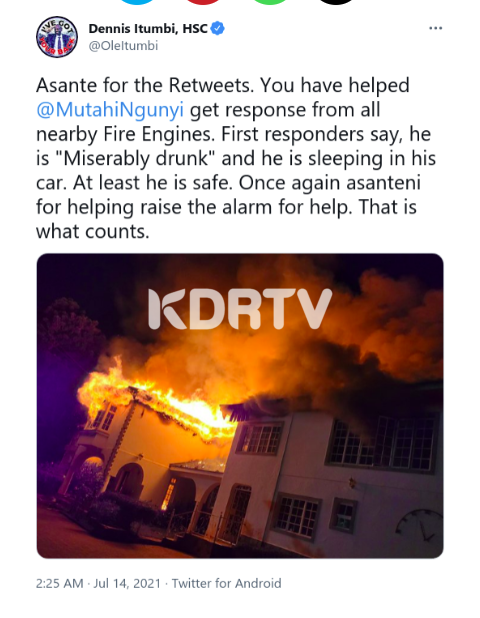 “Asanteni sana for the retweets. You have helped Mutahi Ngunyi get help from all nearby fire engines. First responders say he was miserably drunk and sleeping in his car. At least he’s safe,” Itumbi Tweeted.

A few hours later, Itumbi clashed with Ngunyi over how he made his announcement on social media regarding the photo.

Ngunyi, while confirming his house burned down, said it caught fire just a few minutes after he spoke about the Kiambaa fire incident.

“I note the attempt to tie in mischief, but I ignore. If you ever witness/suffer such tragedy, text real-time if you can, I will tweet before the 16th minute.

“Notwithstanding what you have talked about hours before. By the way, it takes courage to market your channel, at such moments!” noted Itumbi.