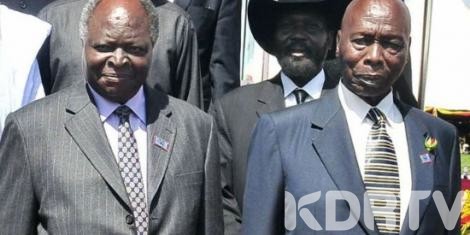 It is turning to be a very bad week for Kenyans as two former Presidents; Daniel Arap Moi and Mwai Kibaki are currently admitted at the Nairobi Hospital.

According to the Star Newspaper, Kibaki has been at the facility since Monday, for what has been described as pain management.

“Mzee was taken to the hospital for some check-ups but we are praying for him,” a source told the star.

Kibaki, regarded as one of the most successful Kenyan Presidents, returned to the country from Londo, UK last week where he had gone for an intensive check-up on his knee.

Kenya’s third President has been having a stubborn knee since an accident at the Machakos Junction in 2002. The accident happened when he was coming from a political rally in Machakos and he had to be airlifted to the UK for treatment.

He still won the elections the same year, thanks to a strong campaign team led by Raila Odinga, but he was sworn in on a wheelchair.

Read Also: Why Kibaki was the Worst Economist in Africa

He has undergone two notable surgeries since the accident. In 2004, he was admitted at the Nairobi hospital for eight days as doctors successfully removed a blood clot in his left leg. This enabled him to walk for the first time since the 2002 accident. Despite being 88, he has never used a walking stick.

In 2016, he went for another surgery in South Africa, this time it was the carotid artery on his neck that had a problem.

Kibaki has kept a low profile since leaving office in 2013. The former President leads a private life at his Muthaiga home.

Mzee Moi is also admitted at the Nairobi Hospital with breathing problems. His family says he is in a stable condition.