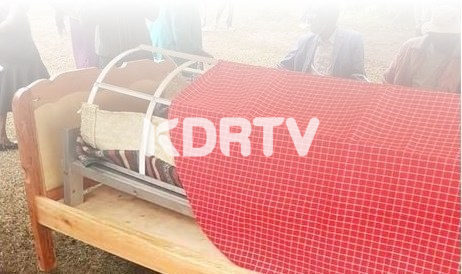 A 77-year-old man left his family in Uasin Gishu County with no option other than to follow his wishes of having an orthodox burial ceremony.

Paul Chemng’ok was unceremoniously buried at his home in Kipkenyo only covered with cowhide as he had stated in his will just days before he died.

His younger brother Serem Kispsaina who spoke to K24 said that his last wishes were followed even though they meant breaking a lot of customs and traditions.

According to Kispsaina, there was no preaching or even eulogizing the old man before he was lowered to the grave.

“Before he died on Sunday, he reminded us of how he wanted to be buried,” he said.

“He insisted that there should be no eulogies at the burial, no preaching and that his body be covered with the hide of the bull that would be slaughtered after his death.  He wrote all this in a will, and we did exactly as he wished.”

The brother said the old man, who was born in 1944 and grew up in Senetwet village in Nandi Couty, didn’t believe in any religion.

The old man was however buried in accordance with Nandi cultural burial rights; facing east and his head facing his right-hand side.

“Chemngok as we used to call him as our elder brother did not believe in any religion be it Christianity or Muslim despite our large family having people who believe in the two religions. He only believed that there was a creator whom he prayed to in his own way,” Serem added.

Subscribe to watch latests videos
In this article:Kenyans, Uasin Gishu