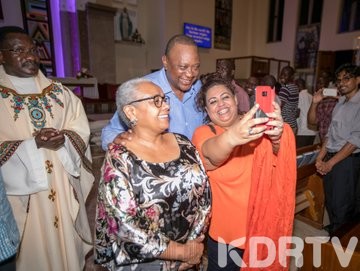 (KDRTV)-President Uhuru Kenyatta has continued with the first family tradition of celebrating Christmas in the coastal city of Mombasa.

This festive season was not an exception as Uhuru led first lady Margaret Kenyatta, his mom Ngina Kenyatta and other members of the family to the coast.

State House said that the President attended the Christmas eve mass at the Saint Francis of Assisi Catholic Church in Nyali. Uhuru also took time to take selfies with ordinary Kenyans who had attended the mass. Children from various Children Homes were invited to the day-long party at State House Gardens during which they received assorted Christmas gifts, including electronic items such as TV sets, from the President and the First Lady. pic.twitter.com/06yle3WHFa

In 2018, the President took an SGR ride to Mombasa for the Christmas and New Year festivals.