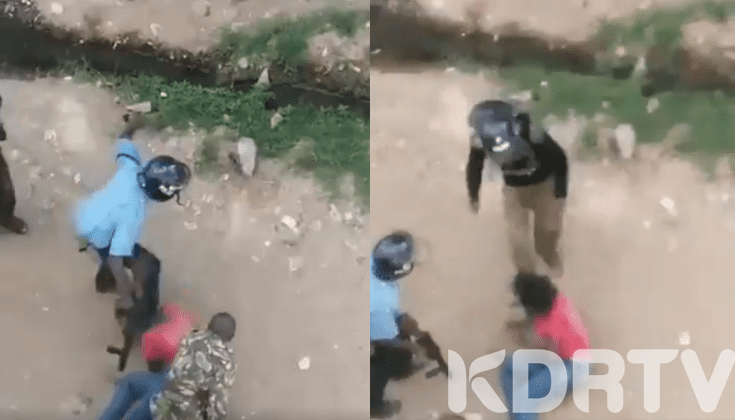 Police officers are on spot after videos of them beating up students of Jomo Kenyatta University of Agriculture and Technology (JKUAT)  emerged.

KDRTV has learned those police officers from Juja, Kiambu County that was deployed to calm the students have been criticized to have used excessive force on the students.

In one footage, three officers are seen beating up an unarmed student lying on the ground, with two of them both kicking him on the head twice

In another video, a bunch of officers is seen strenuously breaking into an apartment occupied by a student before they fired tear gas canisters to smoke the student outside.

In the third video, according to Citizen Digital, a lone officer is seen firing at probable students ahead of him outside one of the hostels

Situation in Juja, outside #Jkuat pic.twitter.com/kPuOwgwEBO

JKUAT Deputy Vice-Chancellor of Academic Affairs Prof. Robert Kinyua, in a memo advertised on Monday, announced the Senate had in an exceptional assemblage decided to shut down the institution following student unrest.

Prof. Kinyua thus directed all students to clear from the campus by mid-day

The students had earlier on took to the street to protest over presumed security concerns where they blame the police for not doing much to protect them.