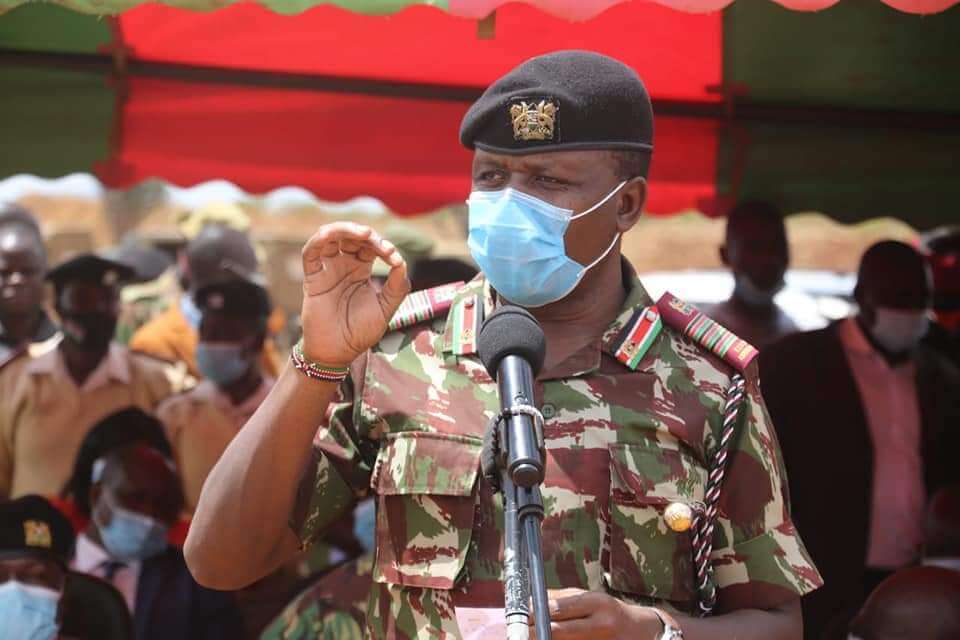 The Agricultural Development Cooperation[ ADC] had 17000 acres of land in Trans-nzoia County hence 15,000 were given out needy people where beneficiaries were given two and a half acres each.

The RC who held a security meeting at Chepchoina area along the West Pokot and Tran-nzoia Counties said the government will follow up and reclaim the land.

The scheme has been having many problems with squatters as the scheme unlawfully evicted them from their lands that they have owned for over twenty years every planting season.

Uncertainty has been at the disputed area after houses were last week destroyed by security officers and residents evicted from what they claim are their lands.

More than 700 affected persons at the scheme are up in arms after being evicted from the land they claim it belongs to them.

This is after their homes were destroyed and now become squatters camping at Katikomor trading center and border peace school in West Pokot county while others have started fleeing to the neighboring country Uganda to seek refuge.

Mr Natembeya who disbanded the Chepchoina land committee asked Government officers and politicians in possession of huge chunks of land at the scheme to surrender them and leave the area.’

“The Government had good plans but implementation,”he said.

He instructed the area County commissioner to constitute another land committee that will comprise all communities living in the area.

“We shall do an audit and make sure the land is back to the government .We are going to clean it up and it will be a painful exercise in Chepchoina .We need transparency ,’said Natembeya.

Mr Natembyeya noted that the government has begun an exercise to determine genuine landowners on a disputed 15,000-acre settlement scheme that lies on the border of Trans Nzoia and west Pokot counties.

The exercise, which was launched by the Rift Valley Regional commissioner George Natembeya on Monday, entails the verification of land documents by residents to flash out encroachers.

Mr. Natembeya said there will be a police presence at the settlement scheme to oversee an eviction exercise that will be initiated once the verification exercise is completed.

The scheme was hived off from the Agricultural Development Corporation (ADC) land by the KANU regime in 1999 to settle squatters from Pokot, Luhya, Turkana and Sabaot communities in the two counties.

Kapenguria MP Samuel Moroto was last week arrested when he toured 700 families that were evicted from Sabata village, which is located within the disputed settlement scheme

Mr Natembeya issued a stern warning to cartels and land grabbers who have been stealing land from residents.

Natembaya assured squatters in the area that no one will lose his or her shamba,”said Natembeya.

The RC warned officers from the ministry of lands over engaging corruption and other malpractices.

“We will not accept double allocation of land and highland levies for allotees who are poor and not able to pay for land rates .It is wrong for a piece of land to have more than two title deeds for different people. This is embarrassing the Government, the President and Kenyans ,”he said. ‘

He cautioned residents over selling of public land .

Natembeya, who called for peace in the area, challenged religious leaders to pray for peaceful existence .

“You can’t take tithes and you don’t pray for peace yet your prayers are not going anywhere,’he said.

He urged the displaced families to restrain from retaliation and observe peace as the government looks for an amicable way of solving the land dispute within the shortest time possible.

Trans-nzoia Governor Patrick Khaemba said that the County is among counties with a lot of squatters.’

He called on the Government to weed out tycoons who have grabbed land in the area.

“There are more than 20,000 squatters in Trans-nzoia.Many residents in the Country have no title deeds.We need new vetting of land committees,”said Khaemba.

Senate majority leader Samuel Poghisyo said that the land dispute in the area should be solved once and for all.’

“Land issues are immortal time bombs .We have land disputes because the land is idle .People should develop and cultivate the land.The Government should speed up issuance of title deeds,”posed Poghisyo.

Kapenguria member of parliament Samuel Moroto cited that cartels were bringing conflicts among residents adding that officers in the ministry of land are to blame for the mess at the scheme.

“They are the ones bringing conflict in the area. People should be given back their lands,”he said.

Endebbes MP Dr Robert Pokosse said that residents in the area have suffered for a long time and the land committee was the problem.

“We need a new land committee so that we can help those without anything,”he said.

A resident John Lotodo lamented that the government is unfair to destroy their homes and evict them despite them living at the Chepchoina settlement scheme for years.

He accused the government of bringing tycoons and brokers who do not stay in the area to take up their lands and now they are displaced faulting brokers for interfering with land matters in the area.

He demanded the government to address the long standing dispute and wondered why it was taking too long to resolve the matter.

They protested over evictions from their land, police harassment and destruction of their properties by government authorities.