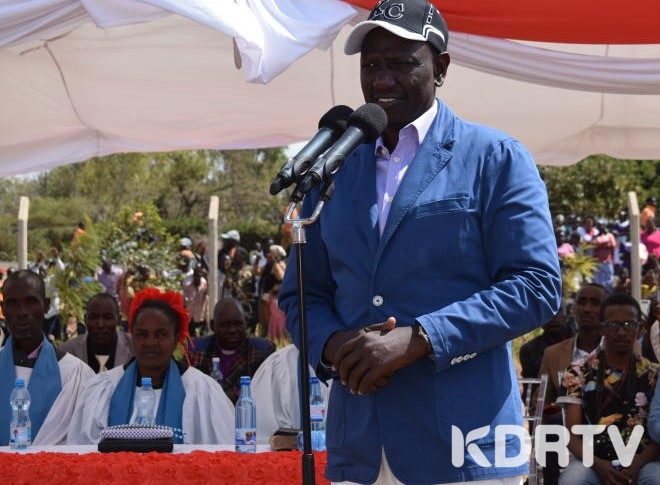 Deputy President During a Fundraiser in Meru County.

The Deputy President William Ruto together with his loyal MPs faulted the Building Bridges Initiative saying that it was a waste of tax payer’s money.

He spoke this while  on a visit in Meru County and made several stops addressing residents and urging them not to indulge in petty politics such as amending the constitution since it was a waste of time and resources.

Ruto also advised other leaders who were fixated on petty politics and amending the constitution to measure what they have done since elected and initiate development that would aim to improve and better the lives of Kenyans.

“They are disturbing us with politics and calling for constitutional amendments. Let us refrain from such politics and put development as the main focus,” said Ruto.

The train stopped at a fundraiser at Karumo Technical Institute where Tigania East MP Charity Kathambi  opposed the motive behind Raila Odinga’s support for the constitution amendment.

She said that the former Prime Minister was fixated on his own interests of ascending to power illegally.

“We will not agree to be burdened by a new constitutions to satisfy the few power hungry individuals. We are a focused team that is in full support of the Deputy President,” said kathambi.

Issues raised among the stops involved the continuous meetings that Raila Odinga has been part of in the last couple of months, where he was delegated the duties of hosting prominent government officials and international visitors.

Earlier in the week the Picture of Raila Odinga and President Uhuru’s sister Kristina Kenyatta created a buzz on social media, leading to some labeling Odinga a traitor.

One of the MPs was very vocal about the matter and said that they as a team were aware of the meetings that the opposition leader held with people from rich families in a bid to succeed President Uhuru.

He however added that the decision of Kenya’s next President is in the hands of Kenyans.

“Raila Odinga has been holding meetings from relatives of rich families in a bid for succession after Uhuru. The power is in the people and they are the ones to decide the next President of this Country,” said the Vocal MP.

The ‘Tanga Tanga’ team and ‘Kieleweke’ team are both in the government, however, there are certain aspects that they have failed to agree on  hence continuous clashing and blame games.