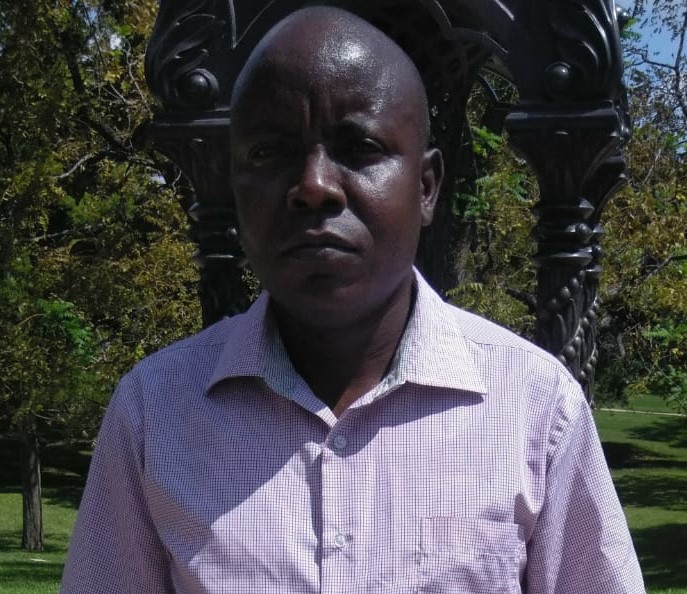 KDRTV News Kisii -A Kenyan American was brutally murdered and his mutilated body parts were stacked in a gunny bag and dumped in a trading center in Nyamira County in Western Kenya.

Family and friends both in Kenya and in America, are shocked at the heinous murder of their son, husband, father, and friend after he disappeared on September 12, 2021, and his remains were later found on October 18, 2021, at Konate in Nyamira County about 40 miles away from the last place he was seen alive.

Mr. Thomas Oyaro Magwamu a resident of Arlington Texas, was in Kenya for his annual leave to see his children, wife, parents, and his relatives when he met his painful death in the hands of murderers whose intention has not yet been unraveled as police are still doing the investigation to arrest the culprits who executed him in cold blood and cut his body parts and placed them in a gunny back.

To those who knew him, Thomas Magwamu was a very generous, kind, and loving person who was working very hard to support his family back home and was also a dedicated Kenyan community member who never wanted to miss any community function especially to help the bereaved and the sick.

According to his closest friend and roommate, Mr. Nemwel Semo, who candidly spoke to KDRTV News Desk, Mr. Thomas Oyaro Magwamu left for Kenya on the 12th of August 2021 through Dallas Fort Worth International Airport. Mr. Nemwel escorted him to the AirPort and saw him off.

Mr. Thomas Magwamu was expected to get back to the US on the 22nd of September 2021.

He arrived safely in Kenya and was welcomed by his family including his wife, children, close relatives, and friends.

He used to communicate regularly with his friend Mr. Nemwel Semo, who is also a resident of Arlington Texas, and other friends living in the US.

The last time he communicated through a phone call to Nemwel Semo was on the 5th of September 2021.

On the 12th of September 2021, Nemwel received a phone call from Mr. Thomas Magwamu’s wife in Kenya telling him that she has frantically tried to reach her husband on his phone but he’s not picking up the phone. So she requested Mr. Nemwel to try reaching him.

Mr. Nemwel tried calling Mr. Magwamu several times, the phone was ringing but no one was receiving the phone call and  it was past 11 pm East African translating to 3 pm Central Standard Time (US)

Mr. Nemwel Semo tried to call him the next day that’s on 13th September 2021, but at that time the phone was switched off.

KDRTV News Crew contacted his wife in Kenya through a phone call who also gave a brief recollection of the last time she spoke and saw him.

According to the wife, Mr. Thomas Oyaro Magwamu left his wife’s residence located in Rangwe Homa County, the morning of 12th September 2021, after his wife had also left to go and visit her relative at Keumbo in Kisii County that same morning.

Before leaving her house that morning, she requested her husband to leave their child who is in lower primary school with a neighbor in case he had an errand or commitment to attend to.

Mr. Thomas called to inform her that the people working for him at a project he was doing close to a town called Nyamarambe in South Mugirango Constituency, had called him to go and see the progress of the project and pay them for the work they’ve done.

A building materials contractor who had supplied him with bricks, also called him requesting to be paid for the materials he had supplied.

Mr. Thomas Magwamu left his wife’s residence in Rangwe and headed straight to the site of his project and met his workers, paid them for the work they had done, plus the Building materials supplier.

He then left his project site and boarded a motorbike which dropped him at Nyamarambe town and that was the last time he communicated with his wife.

Later that night at around 8:00 pm his wife called him to inquire if he was almost arriving home and also to prepare enough dinner to cater for the whole family, unfortunately, his phone went unanswered.

She went ahead and prepared supper and kept his portion in a hot pot. She thought maybe her husband was at Rodi Kopany trading center a place he usually  frequented at a local hotel called Sheraton where there was a good internet network to do his homework and assignments because he was also attending online classes

His wife got alarmed after it reached 11 pm at night without getting a call back from him, this prompted her to call his closest friend Mr. Nemwel Semo in the US and inform him that she can’t reach her husband on phone and if he can also try calling him.  Mr. Nemwel tried several times to call Mr. Thomas Magwamu on his phone but he was not picking, the phone was ringing but no one was picking it and suddenly it was switched off.

The following morning Mrs. Magwamu tried frantically to reach her husband on phone, text messages but no response was forthcoming so she decided to trace him to the last place he told her he was going.

She went straight to the construction site her husband was having a project and inquired about his last steps and the people he met before his disappearance.

When she arrived at the site of the Construction the foreman and his workers, and the supplier of the bricks confirmed to her that indeed he was there on 12th September 2021, paid them their dues, and left for Nyamarambe town, exactly a day before his disappearance.

She also sought to know the Motorbike and the rider who dropped him at Nyamarambe town.

Luckily she found the gentleman who rode with him to Nyamarambe, who also confirmed that he indeed dropped him off at Nyamarambe town and headed back immediately.

Mr. Thomas told him he was meeting someone there before heading to his next destination.

After dropping him the Motorbike man went back to his pick-off station which is a few meters from where Mr. Magwamu was constructing a facility which his wife said was to be a hospital with a bed capacity of 20 inpatients.

From there the wife headed back to Nyamarambe town and wanted some leads on which vehicle her husband boarded and to which direction he went and who exactly he met at the town.

She knows one friend or Customer to her husband who runs a Butchery business in Nyamarambe town and after inquiring about his whereabouts or whom he saw met or was with her husband, the gentleman also acknowledged seeing him the previous day and he was seen with someone which he could not verify his identity.

After asking a couple of people she got leads that her husband boarded a Matatu(bus) bound for Kisii town the Headquarters of Kisii County in Western Kenya, from a bus stop called Centre near a small town called Riosiri at the border of Kisii and Migori counties.

The Driver of the Matatu or bus confirmed to her that her husband indeed boarded his vehicle destined for Kisii town and after arriving in Kisii, her husband didn’t alight from the bus and continued staying in the bus as his phone was charging from the power outlet of the bus.

When it was almost 8:00 pm and the bus was almost full meaning that all seats were occupied with customers destined to Nyamarambe town, he asked Mr. Thomas Magwamu if he was returning back to Nyamarambe or Rongo town but he told him that he was meeting someone in Kisii town and that’s the last person who spoke to his wife on the last point he was seen alive the bus driver knew Mr. Thomas Magwamu he’s either a cousin or a distance relative to him.

Mr. Magwamu’s wife decided to report a missing person at the Directorate of Criminal Investigation at the Nyamarambe police station and was given an O.B Number or Police Occurrence book number.

Mrs. Magwamu claimed that the local police investigators at Nyamarambe office tried to ping or locate her husband’s phone current location but due to their poor network they could not manage to ping the phone but could try to work with their colleagues at the County headquarters to search for her husband’s whereabouts.

Mrs. Magwamu tried in vain to search for her husband in the local vicinity, mortuaries, friends, and relatives’ homes which yield nothing. She also made an announcement at a famous local radio station Egesa, but no one came forward with information of his whereabouts. She also sought the help of social media but still, no progress was made.

On October 18th, 2021 between 3 pm to 8:00 pm at a trading center called Konate in Nyamira County, a saloon car in high speed allegedly with 5 occupants, 3 ladies in the back seat and 2 men, a driver, and another one on the passenger seat, dropped a piece of luggage in a gunny bag and sped off.

The guy who was sitting on the passenger side is the one who came alighted and pulled the gunny bag from the trunk or boot of the car and quickly jumped into the car and the car sped off leaving the gunny bag on the ground.

Next to the place where the gunny bag was dropped is a Motor Bike station where riders are locally known as Boda Boda’s wait to pick customers and drop them to various destinations in the locality.

To them, it’s a regular phenomenon for people to drop luggage and leave for the owners to pick them after a period of time. But this day to them the luggage overstayed and they decided to check the contents contained in the bag.

When they opened the gunny bag they were shocked to find human remains or torso dismembered in the bag without the head.

They immediately called the police and informed them of the contents in the bag.

The police came in the next morning and took the torso to Nyamira County Referal Hospital Mortuary.

The mutilated body which no one could not recognize was left at the Mortuary and when no one claimed it the police decided to take the fingerprint and sent the specimen to Nairobi and it turned out that the torso was for Mr. Thomas Oyaro Magwamu.

The family was informed about the developments which were very difficult to accept and have sent shockwaves across the Diaspora community.

Mrs. Magwamu told KDRTV News Desk that the DCI is still conducting an investigation to unravel the mystery surrounding her husband’s murder and she pleads with anyone with any information to forward it to the police in order for the perpetrators of this heinous crime to be brought to book.

KDRTV News tried to reach the police to have a brief on the progress of the investigation but still waiting for a response from them.

Subscribe to watch latests videos
In this article:Headlines, Murder of Kenyan American in Kenya