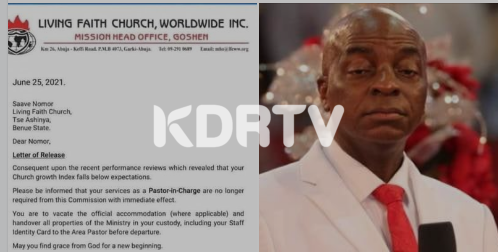 Living Faith Church International, popularly known as Winners Chapel, is currently on the spot for allegedly dismissing at least 40 pastors for not generating income.

In a video posted on social media that has now gone viral, a young Nigerian pastor by the name of Peter Godwin claims that he was fired by the church after struggling to generate revenues in his tenure.

Gowdin claims that he was summoned to the head office along with over 40 other pastors on July 1 where they were all dismissed.

“So after that, I started working, engaging myself in the work of the Lord. I tried my possible best to make sure I win souls for Christ but unfortunately, on the 1st of July, I received a call that the state pastor wants to see me, so I thought I was the only one. I was surprised, so I went to his office.”

“When I got there, I saw other pastors too, over 40 of them, so I joined them. A few minutes later, we were issued a letter. I opened the content of the letter to see what was there and I saw that it was a sack letter.”

Godwin further said that after being shown the door, he later called the office to inquire why they fired him because he did everything right as a pastor.

READ ALSO: You Are Ganging Up For Selfish Gains- Ruto Sends Strong Warning To Raila, Mudavdi And Kalonzo, Says No Alliance For Him

He was however shocked when they told him the church doesn’t operate at a loss.

“So I called the management the next day to know what happened since I wasn’t involved in any dubious activity or evil act,” he said. 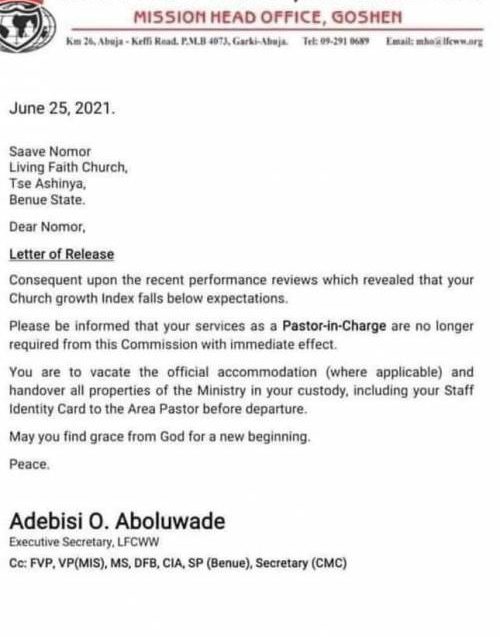 “I was told by the management was that the church doesn’t operate at a loss, they also told me the total income that is being generated from my station should be able to cater for my welfare and accommodation, so as a result of low income, I’m hereby dismissed.”

The church, which is owned by billionaire preacher David O. Oyedepo, is one of the biggest in Africa and has a branch in almost every continent.

Winners was founded in 1983 by Oyedepo.

Subscribe to watch latests videos
In this article:Churches in Kenya, Kenyan pastors, Winners