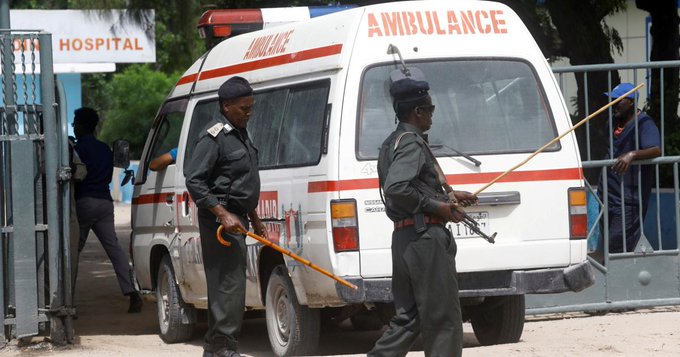 Ambulance rusing the injured to a health facility in Somalia

KDRTV LIVE! At least 15 people have been killed in a suicided bombing attack in Somalia’s military training camp in Mogadishu.

“I have counted about 15 new recruits who have been killed in the blast,” said army officer Mohamed Adan, adding the toll could be higher.

According to Adan, the attacker poised as an army trainee queuing up outside the General Dhegobadan Military when the explosion occurred.

Reports indicate that many people who sustained injuries have been rushed to hospital, a witness told KDRTV.

No group has claimed the attack however, security groups in Somalia are common targets for Islamist militant group al-shabaab.

Al-Shabaab has operated in Somalia for more than a decade battling to control the country against the UN-backed government in Mogadishu.

Al-Shabaab is also known to be targeting hotel and security checkpoints.

Despite the deployment of AU troops in Somalia, Al-Shabaab has remained a stronger terror group in Somalia.