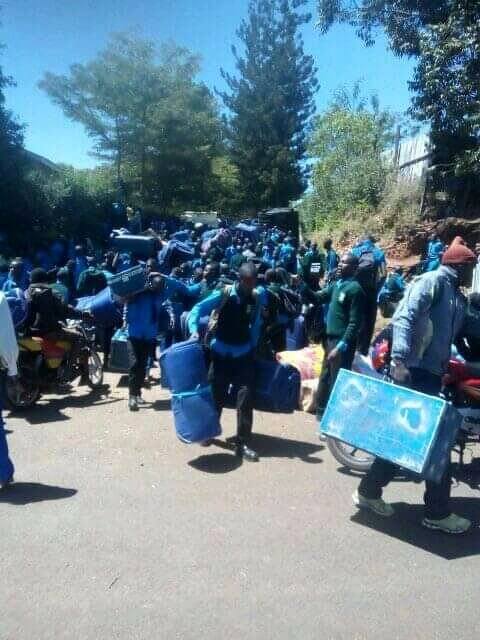 Students at Chesamisi High school went on rampage on Saturday evening, destroying property of unknown value. This included the Principal’s car and another teacher’s vehicle.

According to pictures shared on social media, the irate students also broke into the ICT room and destroyed computers. They shattered windows at some buildings.

The school administration claimed that the students were angry over a decision to suspend some 50 of their colleagues. The suspended students committed in March last year, before President Uhuru Kenyatta closed schools to curb the spread of COVID-19.

Those Chesamisi Boys High School students in Bungoma County destroyed everything including cars belong to teachers, broke desks and chairs, windows, destroyed books in the library but spared the dining hall. All because the school changed Entertainment hours. Wow!

However, students revealed anonymously that the administration has refused to listen to their grievances.

They questioned why entertainment had been moved to Saturday afternoon from the normal Saturday night.

Just a day after the strike at Chesamisi, Kimilili Boys, located within the same Constituency also went on rampage.

The unrest started at around 11 PM on Sunday with witnesses saying gun shots were heard for more than an hour.

Some students were seen in Kimilili town as police used teargas to manage the unrest.

It is not clear what caused the unrest with different sources claiming that the learners were not happy with the punishment meted out on one of them by school prefects.

There are also rumors that the strike could have been caused by a seething disdain for the new headteacher.