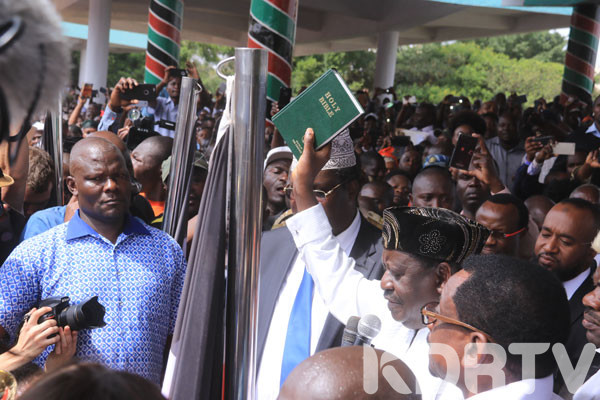 (KDRTV) – Uasin Gishu Woman Rep Gladys Shollei has sensationally claimed that ODM leader Raila Odinga won the Presidency in 2007 but he lacked the proper strategy to ascend to power.

Speaking on Citizen TV’s Daybreak on Tuesday morning, Shollei confidently stated that 2007 was Raila’s final chance to be President and he will never get another opportunity.

She said Deputy President William Ruto and the whole Rift Valley played a critical role in the 2007 vote when Raila looked certain to beat Mwai Kibaki before a controversial last-minute vote tallying which put Kenya on the brink of war.

“It is my personal opinion that Raila Odinga did win the 2007 election and guess who was behind him, Dr. William Samoei Ruto and the whole of Rift Valley, that’s how he won…” Shollei said.

“It is my personal opinion that Raila Odinga did win the 2007 election and guess who was behind him, Dr. William Samoei Ruto and the whole of Rift Valley, that’s how he won…” – Gladys Boss Shollei, Woman Rep. Uasin Gishu #DayBreak pic.twitter.com/fBMb7u0Gu5

The vocal MP warned the former Prime Minister that he will not be President in 2022.

“Raila has made his mark in history, he is a formidable politician but there is something wrong with his strategy, I’m very sure in 2022, he will not win the election, period!” She said.

Shollei further claimed that Raila has been hoodwinking Kenyans by claiming that the BBI report is not about politics yet he wants to create the position of a powerful Prime Minister, which is a political seat.

“Raila Odinga has said it (BBI) is not about positions, he is lying, it is about positions, we have been talking about the Prime Minister position, we are creating positions instead of addressing pertinent issues,” she said.

Her remarks came just a day after a section of leaders from Uasin Gishu announced that they will not allow BBI rallies in the county.

MPs Oscar Sudi (Kapseret) and Caleb Kositany (Soy) called a Press Conference in Eldoret on Monday and said that the county will not allow BBI rallies because Raila is using the forums to divide Kenyans.