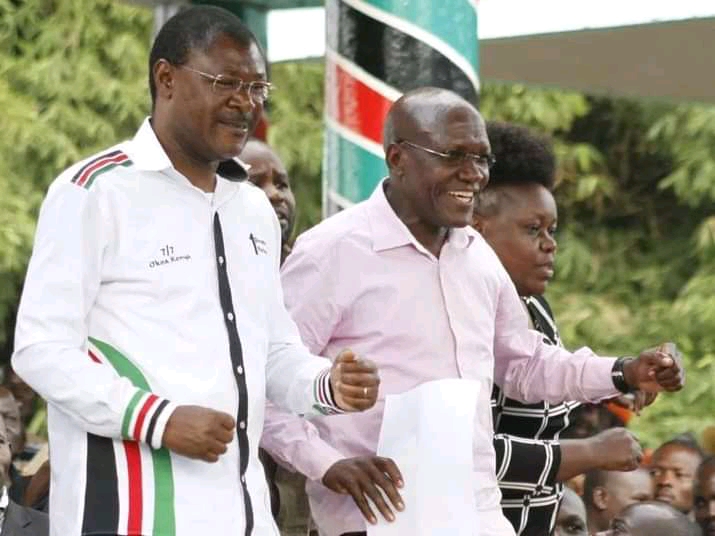 The former prime minister Raila Odinga graced the christened Luhya unity rally at Bukhungu Stadium, Kakamega, where he was overwhelmingly endorsed to vie for Presidency by the heavyweight Luhya leaders allied to Azimio la Umoja.

The Luhya Council of Elders also resolved to endorse the Kakamega County Governor Wickliffe Oparanya as the Luhya spokesperson ahead of 2022 general election. Oparanya was mandated to bargain, act and represent Luhya community to other political bigwigs for 2022 pre-election negotiations.

On the other hand, Deputy President William Ruto was flanked with a score of Hustler Nation defenders from Mulembe region to embrace the MALALAH SUPER CUP FINALS at Mumias Sports Complex Centre as the political statements rocked the event.

Former Kakamega senator Bonnie Khalwale was treated to a rude shock after the charged crowd of youths cut his speech short by filling the air with pro-Malala chants at Mumias Sports Complex Center.

Khalwale had pitched camp to rally electorates to endorse his bid Infront of Malala, a move that prompted ANC supporters to expose subject Khalwale to heckling and booing as DP Ruto stared in disbelief.

“I know Malala is my competitor and we are all seeking for Kakamega gubernatorial seat, I urge you to tell Malala to maintain Senatorial position and leave for me the governor’s seat” Khalwale said.

In a quick rebuttal, Malala chided Khalwale to drop his gubernatorial desire and run for the Senatorial position in 2022.