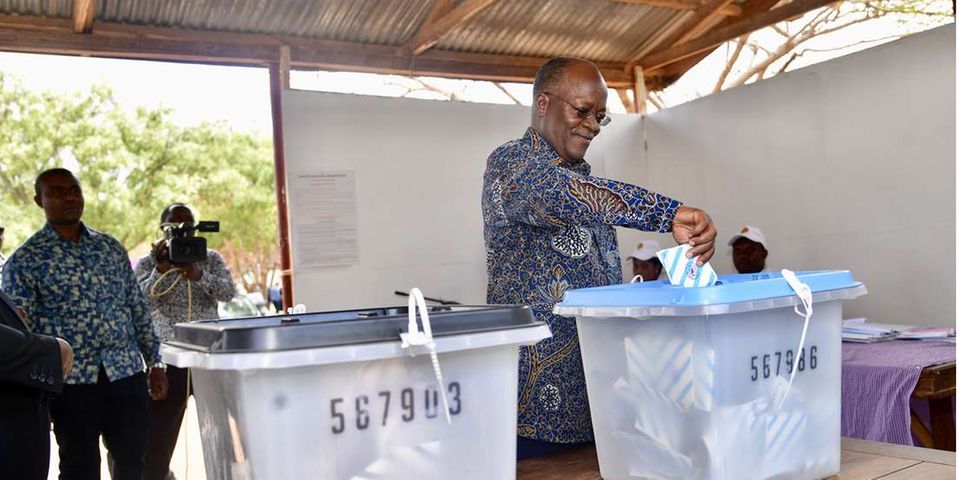 The country’s electoral commission announced the ruling CCM party’s Hassan Mwinyi as the President-elect for Zanzibar despite preliminary reports showing that Seif Sharif Hamad of ACT-Wazalendo was leading the polls.

Local media has now reported the presence of the military in Zanzibar as an attempt by the government to repress any dissent.

Security officers believed to be from Burundi accused of being used to kill protestors in Zanzibar.

They are armed with hammers, pangas and jembes pic.twitter.com/GGq6Su2G9p

Reports on social media claim that the soldiers from the neighboring country have killed several locals. At least 10 people have died in Zanzibar since Monday this week. There have been claims that police have thrown bodies into the Indian ocean.

Meanwhile, Magufuli has taken a huge lead ahead of his closest opponent Tundu Lissu of Chadema in the preliminary results released so far.

The ruling CCM party has won 200 parliamentary seats in mainland Tanzania in the results confirmed so far. The opposition has only two seats.

Shame on you, CCM. So far CCM has won 168 seats, opposition 0. In Zanzibar, CCM won the all damn thing in Pemba! How is this even possible? I’m witnessing the darkest days for Tanzania's democracy. Fucked up shit! Fraudulent election. @usembassytz @SenateForeign @robertamsterdam pic.twitter.com/R8aydEZ91c

There have been eyebrows after Magufuli’s party won parliamentary seats in opposition strongholds.

It's a shocking victory for CCM as the ruling party is now claiming landslide victories across the Opposition's strongholds. As of this moment, most Opposition leaders have been defeated. #TanzaniaElections2020

Robert Amsterdam, a lawyer for opposition candidate Tundu Lissu has been vocal on social media calling for the international community to intervene on what is happening in Tanzania. Lissu said on Wednesday evening that he will not be accepting the results.

The US embassy in Tanzania has raised questions about CCM’s overwhelming margin of victory. The embassy said there are credible allegations of vote-rigging in the elections.

Statement from the U.S. Embassy on Tanzania's elections pic.twitter.com/SL1A6TbTmB