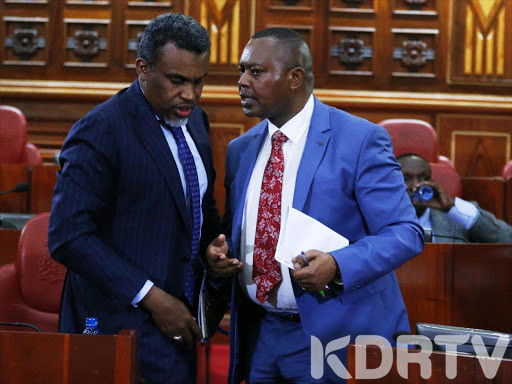 (KDRTV) – Two years ago Director of Public Prosecution (DPP) Noordin Haji and Director of Criminal Investigations (DCI) were inseparable. They used to hold press conferences together. Kenyans thought they had finally found the duo that would rid the country of crime.

But that is not the case as the two are reading from totally different scripts at the moment. It is long since the two were seen together in public. What could be happening?

According to the People Daily, the relationship between the two most important offices on matters justice is at an all-time low as both Kinoti and Haji blame each other for what happened.

According to the paper, the DPP has accused the office of DCI Kinoti of conducting shoddy investigations before the arrest of suspects and therefore leading to the acquittal of criminals. On his part, Kinoti claims that the DPP is making weak prosecutions especially when it comes to corruption cases.

It is worth to mention that despite the high profile cases that the duo has taken to court, they are yet to record any major convictions.

Last week, Kinoti was put under the limelight for the manner in which investigations into the arrest of Court of Appeal Judge Sankale Ole Kantai was arrested in relation to his association with the late Dutch Business Tycoon Tob Cohen’s widow Saraha Wairimu.

Former Chief Justice Willy Mutunga took to social media to question how and why the media got to know of Sankale’s relationship with the main suspect in the macabre murder.

“Is the media in breach of the right to privacy? Reporters also get intel from investigators raising the issue of the right to a fair trial,” Mutunga wondered on Twitter.

Nairobi based lawyer Ahmednassir Abdulahi has also questioned how investigation files get to the media before getting to the office of the Directorate of Public Prosecutions.

He claimed the DCI is using the media to rally public opinion against the accused.

Previously, Chief Justice David Maraga also raised concerns over the way in which DPP Haji was filing cases. He said the cases were poor and he also accused the DPP of failing to provide witness statements on time to, denying those accused to defend themselves.