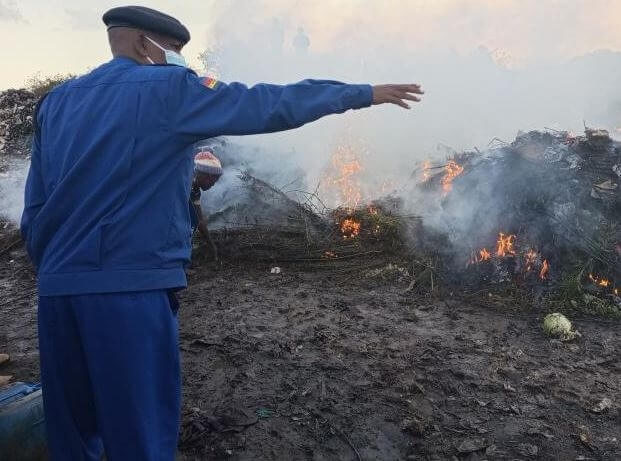 Police officer watches as bhang worth millions is burnt

(KDRTV) – Police in Naivasha have torched bhang worth Ksh 81 million after being granted permission by a court.

There was tight security at the Naivasha dumpsite on Thursday morning as almost 3,000 stems of the illegal drug went up in smoke. The public was kept at bay during the exercise.

The bhang was nabbed at the expansive Kedong farm in Mai Mahiu during a sting exercise last week. 14 suspects, among them one woman, were arrested during the exercise.

Read Also: Raila Odinga Says His Family is Worth Only Ksh 2B

The suspects were arraigned before Naivasha Chief Magistrate Kennedy who declined to release them on bail following an application by the prosecution.

Naivasha sub-county Commissioner Mutua Kisilu confirmed the incident, saying police are looking for more suspects in the bhang business within the region.

“We have managed to burn bhang worth over Sh81m that was recovered by our officers last week,” he said.

“We believe that there is a major cartel involved in this trade and we shall not rest until we arrest and charge them in court,” Kisilu added.

Meanwhile, former Kakamega Senator Boni Khalwale has criticized, the arrest of suspects in the saga, claiming that they were just hustlers trying to survive by cultivating bhang.

There have been several calls to legalize the use of bhang in Kenya. First, it was former Kibra MP Ken Okoth (Late) who argued that the drug can be used for medical purposes. Okoth was preparing to table a bill on the floor of the house but he succumbed to cancer in July 2019.

Recently, Narok Senator Ledama Ole Kina has been leading calls to legalize the use of Marijuana.

“If this is good to reduce the pain in cancer patients, why don’t you legalize it? What is so bad about it? We only live once. If weed is good, then let’s legalize it. If it’s bad then let’s not allow other people in the world to plant it,” Ole Kina said in September last year.

Though illegal, bhang is widely used in Kenya.