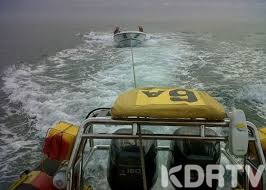 Twins who had gone for a fishing expedition in Kilifi County, Watamu Beach have been reported dead, with one of the bodies retrieved after strong waves blew and capsized the boat.

The two, accompanied by two fishermen had set off to the deep sees to fish   before the strong winds and waves attacked their boat and capsized it to sinking.

The two fishermen got saved after swimming to the safe waters. One of the twins died and body retrieved later on, while the other twin succumbed two hours after being taken to Malindi Sub county hospital.

The incident was confirmed by Malindi Sub-County Commander Philip Wambugu who urged fishermen to study tides before embarking on the fishing adventures.

“Many fisherman have been in fishing for long and they should not take precautions for granted because they have experience,” said Wambugu.

This comes just a week after a tragedy occured in Likoni where a vehicle plunged into the Indian Ocean with two occupants on board, Mother Mirriam, aged 35 years and daughter Amanda aged 4.

This incident that is yet to be solved has attracted the interest of people globally, with majority questioning the safety measures and precautions required for water transportation. For instance, in this case, the authorities have blamed the fishermen for failing to study tides before going for fishing escapades while in the case of the Likoni tragedy, the blame was on the Kenya Ferry for negligence.