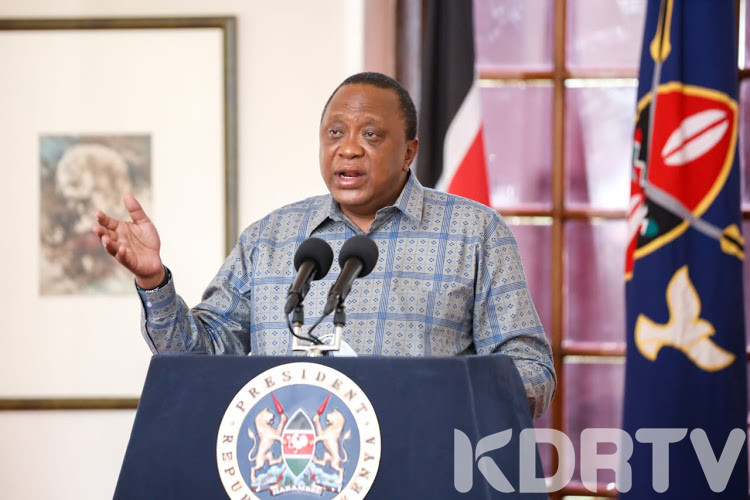 (KDRTV) – President Uhuru Kenyatta has extended the nationwide dusk to dawn curfew as the number of COVID-19 cases rose exponentially in  the past one week.

49 cases were reported on Saturday alone, bringing the number of confirmed cases to a whopping 830. While addressing the nation from State House Nairobi, the President also confirmed that that the number of deaths had risen to 50 after five more people died from the dreaded virus.

More worrying is the fact that close to 30% of the deaths occurred at home meaning they were unreported and untested before death.

It is in view of these facts, that the curfew and lockdown into and out of five counties was extended up to and until June 6.

“The cessation of movement into and out of the Nairobi metropolitan area and the counties of Kilifi, Kwale, Mombasa and Mandera that is currently in force shall also be extended up to and until June 6, 2020,” he said.

The President further sought to assure Kenyans that the government “will continue to take every measure it can” to protect them from the pandemic as well as to “plan for the recovery of our economy post the crisis.”

Uhuru has also ordered the closure of the Kenyan border with Tanzania and Somalia for 30 days following the rise of cross border cases. According to President Kenyatta, 43 of the cases reported within the last week were confirmed in border points such as Wajir (14), Isebania (10), Namanga (16), Lungalunga (2), Loitoktok (1).

Only cargo trucks will be allowed to enter into the country subject to testing of drivers.

“All drivers of the cargo vehicles shall be subjected to mandatory COVID-19 disease testing and will only be granted entry into the territory of the Republic of Kenya if they test negative,” he said.

Subscribe to watch latests videos
In this article:Curfew in Kenya, Headlines