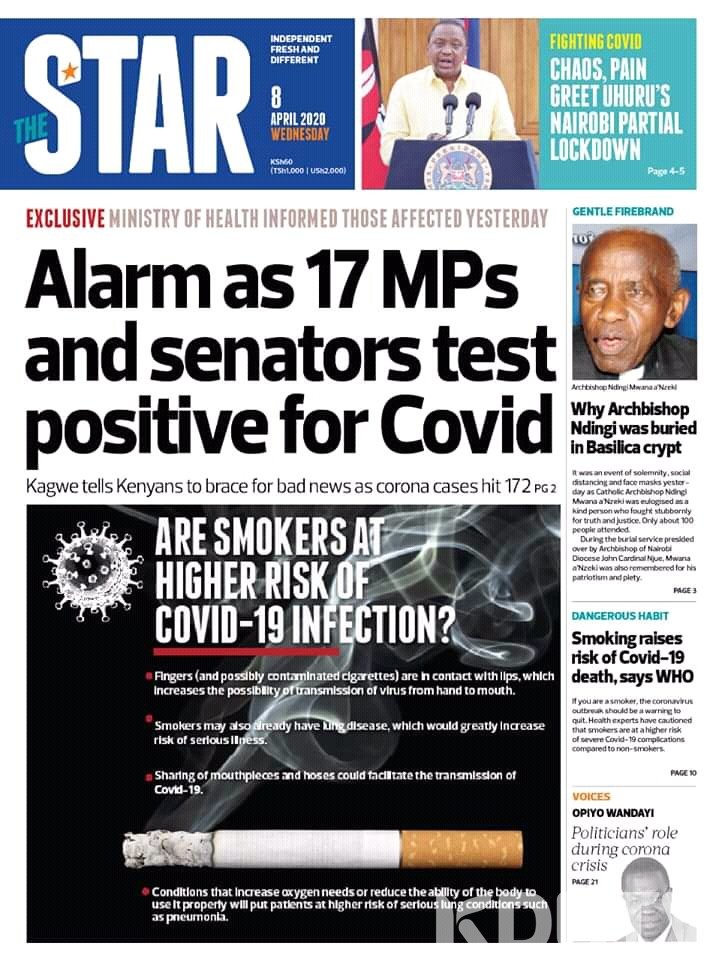 (KDRTV) – President Uhuru Kenyatta recently said that Coronavirus does not discriminate. It attacks both the poor and the rich without fear or favour.

The disease is an equalizing factor. If you test positive, you will end up at Mbagathi Hospital which does not have a private wing for the rich. It is even worse for influential Kenyans who can’t travel outside the country for treatment. Almost all airlines have been grounded after countries restricted travel as one of the ways to curb the spread of the virus.

Read also: Uhuru Bans Movement In And Out Of Nairobi, From Now

It means that politicians have to use the health facilities available in their countries. These facilities are not what they are used to because they stole money meant to equip them.

It is for this and other reasons that Kenyans are celebrating reports that at least 17 MPs and Senators have tested positive for the dreaded Coronavirus.

"A time shall come when the white man's country will no longer be safe for African leaders to travel to, they will be forced to stay and make positive change for Africans"
Nelson Mandela. 1918-2013. THE TIME IS HERE!! 😁👏#17mps

On Tuesday evening, two local newspapers revealed that the legislators had reportedly contracted the deadly virus after interacting with persons who had the virus already. The MPs were tested at Parliament buildings and the numbers could be more as some had not received their results.

We have more Governors, deputy gov, senators, MPs, women reps, mcas and other nominated leaders than the number of number of ICU beds that we have 😨
Let this #17mps be taken to the their respective constituency to the hospitals that they build and supervised #KasaraniUpdates pic.twitter.com/RRdAN6VNhn

Nobody is feeling sorry for the lawmakers. In fact, Kenyans on social media have unanimously agreed that the politicians should be sent to their respective constituencies and counties to be treated in the very health facilities they have been neglecting for so long.

No Governor, Senator or MCA should be taken to Nairobi for Coronavirus treatment, take them to their county hospitals. Let them use what they think are good for wananchi. They are not special in any way.#17MPs pic.twitter.com/4CTmev4yml

Here are some of the things that Kenyans are saying:

God is answering kenyan prayer, Those 17MPs and senators are among those who failed to improve our healthcares and equip them with better drugs and modern equipments, They have been seeking medical abroad while leaving us here! Let them taste what we have been enjoying. #17mps pic.twitter.com/TszwJcmvhG