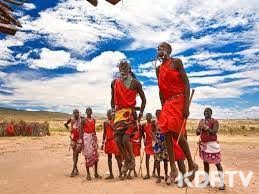 A girl aged 9 was relieved from tribulations of forced marriage to a man, John Nchoe who was over 30 years older.

This happened in Narok County, Oloontoto Village on Monday Evening.

Reports had been going round about the old man’s plan to marry a minor, with preparations made to facilitate the ceremony.

He was initially warned and talked out of the idea of marrying a minor but did not heed to any of the warnings.

His close family including his mother and sister supported the move and even helped pave way for the welcoming of the girl.

Even at the time of arrest, his other resisted while the sister hauled insults on the police officers.

However, things turned foul when armed police officers stormed his place together with a children Human Rights Activist, Joshua Ole Kaputa to collect and rescue the girl.

The activist had notified the police of the plans and tipped them on the current location of the victim before they stormed and relieved her.

The girl, afraid and scared affirmed that she had already been married for a week.

Ideally, the old man responsible for these actions was not guilt ridden claiming that he deserved the girl as his wife since he had already paid bride price and it was accepted.

Cultural practices such as early marriages and FGM are the leading problems of the girl child in Narok County.

These problems have contributed to school drop outs and early pregnancies that have been on the rise.

The government burned these torturous practices and any people engaging in them do it illegally and were required to face arrest and get charged.

The Children Rights activist said that the first step to curbing the practices should start by discouraging the acts and arresting those people who engaged in them.

He added that this should serve as a lesson and stop those old men from prying on  minor girls.