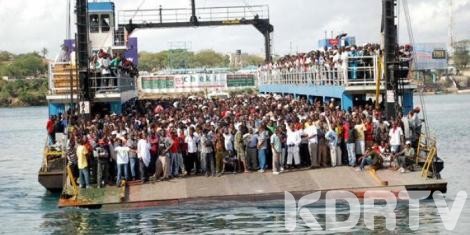 Kenya Navy Divers have managed to retrieve one body from the Likoni Channel following the Tragedy in which a vehicle plunged into the ocean on Saturday morning.

According to the Kenya Ferry Services (KFS),  a multi-agency team is now trying to retrieve the saloon car.

KENYA NAVY divers retrieve body of a man from the ocean at the Likoni Channel after a vehicle plunged into the water earlier today. pic.twitter.com/8o80CUU2Wc

KFS said that the driver of the yet to be identified saloon car drove into the ocean at high speed at around 4:20 AM on Saturday morning.

“It is with sadness that we would like to confirm that at around 4.20 am on the Mainland side of the channel, a motorist driving a saloon car whose registration number plate has not yet been established right away after purchasing ticket drove off to the ramps with high speed to the ocean even after being flagged by our ramp controllers to slow down and stop,” reads part of a statement from KFS.

KFS are treating the case as a suicide mission.  The number of people in the vehicle is yet to be established.

Mombasa Governor Hassan Joho, confirmed the incident saying that he had dispatched experts from his government to help with the recovery efforts.

Early this morning we had another tragic moment at the Likoni ferry channel where a saloon car plunged into the Indian Ocean from the Likoni mainland ramp. I immediately dispatched a unit from our inspectorate department to join multi agency rescue team in the ongoing operation.

Unlike in the previous tragedy,  where it took more than 24 hours for KFS to start the search operation of the vehicle which killed Mariam Kighenda and her daughter Amanda Mutheu,  this one started immediately.

Joho has asked all ferry users to be extra careful.

“In the meantime I urge all ferry users and management to exercise extreme caution as we join the families of the occupants in the vehicle in prayer. We cannot afford to have any more casualties in similar fashion more so when it can be avoided,” Joho pleaded.