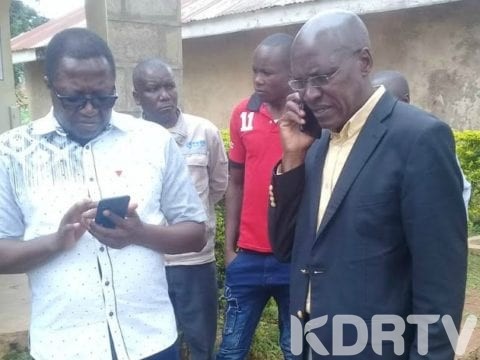 The family of former Kakamega Senator Boni Khalwale is mourning the death of his wife Adelaide Khalwale, succumbed to cancer while receiving treatment at Moi Teaching and Referral Hospital (MTRH) cancer on Saturday morning.

She was a secretary at the Masinde Muliro University before embarking on the cancer treatment journey since 2003.

The demise was communicated by the vocal Khalwale through his twitter account followed by outpouring support and from politicians across the country.

“Amazing that my wife, my childhood friend Adelaide has just died. We have been together for 39 years and I was certain we would defeat the cancer battle,” Khalwale said via a tweet.

When she was diagnosed with cervical cancer in 2003 we fought & she recovered. Then this year she came down with Multiple Myeloma. Post chemotherapy blood & bone marrow profiles this week confirmed 100% cure. Amazing that my wife, my childhood friend, Adelaide, has just died! pic.twitter.com/sDXG08f0Wq

According to the vocal politician, the wife was discovered with cervical cancer in 20o3 and later recovered under intense and continuous treatment.

He added that this year she was diagnosed with multiple myeloma and has been under chemotherapy and blood profiles, with a confirmation this week that the cure was at 100 percent.

‘This week were were certain of a 100% cure after chemotherapy. May God rest her soul in peace,” said Khalwale.

Bungoma Senator Moses Wetangula condoled with the family, saying it was a big loss to the family and the Masinde Muliro University as a whole.

My heartfelt condolences to my brother Bonny Khalwale and his family following the loss of his first wife. May the good Lord rest her soul in eternal peace. Amen!!

Kakamega Governor Wycliffe Oparanya also narrated that he had learnt with sorrow of the death of a hardworking and independent woman who had demonstrated servant leadership to the Masinde University community.

“On behalf of my family and the entire Kakamega County, I send my heartfelt condolences to the loved ones of the late Adelaide and pray to God to give them the strength to bear her tragic loss.” said Oparanya.

The family is still in sorrow and has pledged to outline a detail program that will aid the public and family celebrate the life of a woman they all loved.