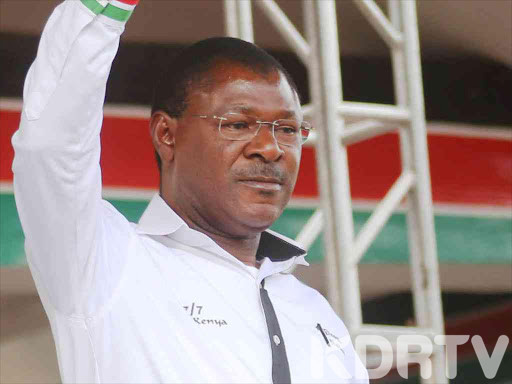 (KDRTV) – It was always going to end one way for Moses Wetangula. There was no way he could have remained Ford Kenya Party Leader.

The Registrar of Political Parties has gazetted the changes in Ford Kenya leadership, replacing Wetangula with Kanduyi MP Wafula Wamunyiny.

Wetangula is just collateral damage in the big fight between Deputy President William Ruto and the System.

The system is hell-bent on ensuring Ruto does not have any political allies ahead of the 2022 Presidential campaigns.

Wetangula had smiled at Ruto, he had to go.

The Bungoma Senator has not formally met with the DP but the relationship between Kiminini MP Chris Wamalwa and the DP raised eyebrows. It seemed Wamalwa had the blessings of his boss to engage Ruto.

Sensing danger, the handshake proponents had to act. First, Wamalwa was ousted as the National Assembly Deputy Minority Whip.

And then, ODM leader Raila Odinga and COTU Secretary General Francis Atwoli made the next move, plot Wetangula’s ouster.

There is a way I feel the registrar of political parties is playing a big role in all this ousting of Moses Wetangula. Or is there a force intimidating her to make the changes the way they themselves want?? 🤔 pic.twitter.com/PXxIB4OXb8

At one time, Wetangula had promised to run for presidency. How will he do that when his party members do not even trust him with the leadership of the Lion Party?

Subscribe to watch latests videos
In this article:Headlines, Moses Wetangula