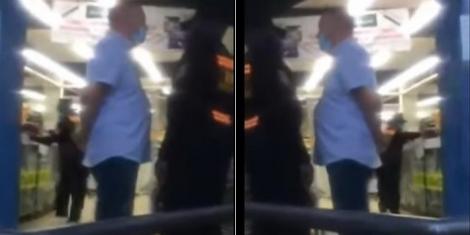 A foreigner has made it to the local trending lists after being recorded hurling insults and threatening to beat a security guard and other Nairobi residents.

The clip, which was has been doing rounds on social media since morning, was recorded at Chandarana Supermarket in Ngara.

READ ALSO: Yet Another Artist Begs Kenyans To Help Him Clear Rent Arrears

The white man claimed the supermarket’s security guard stopped him for no reason resulting in the altercation. According to the person who recorded the clip, the guard was just doing his job but the man felt entitled.

“He was so abusive. Guards are under strict instructions from companies and management to carry out their jobs.

“It is sad seeing such people attempting to use their powers to assault and abuse our locals,” the Nairobian who recorded the video complained.

In the video, you can hear Nairobi residents accusing the white man of being a racist. The foreigner at one point threatens to beat the security guard who doesn’t nudge and continues to block his way.

Onlookers then dared the white man to beat the security guard if he wanted to enjoy a night in jail.

“We will send this to diplomats and the police. This is unfair. Why should you beat a security guard?” he questioned.

“Do it, bring it on! Do it!” the foreigner threatened while abusing the witness who was recording the video.

Watch the altercation below: