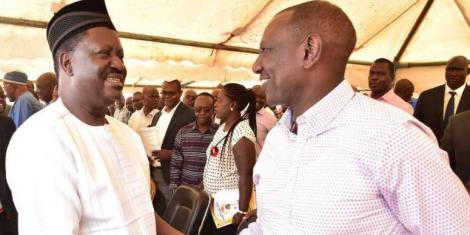 (KDRTV) – Kenyans from all walks of life have put their differences aside to celebrate ODM leader Raila Odinga on his birthday.

The former Prime Minister turned 76 today (Thursday) and Kenyans took time to remind him of the role his played in fighting for the freedom everyone enjoys today.

Deputy President William Ruto’s allies were also not left behind as they sent their warm regards to the African Union envoy to disappoint the political differences with their boss.

Kapseret MP Oscar Sudi said that Baba has done a lot for this country and will be remembered for his role in the second liberation.

“Happy 76th birthday Baba Raila Odinga. You have done a lot for our country. We are grateful for your role in the country’s second liberation. You are known to be a longtime defendant of human rights and social justice,” Sudi said in a message on Facebook.

The second term lawmaker, however, warned Raila that the BBI may destroy his legacy as it is not the solution to the problems facing the country.

Happy 76th birthday Baba Raila Odinga . You have done a lot for our country. We are grateful on your role in the country…

Gatundu South MP Moses Kuria, who enjoys a love-hate relationship with the ODM leader, reminded Baba of his achievements in the past four decades.

“Happy 76th Birthday my friend Raila Odinga. You have seen it all. You have been at the center of all major political developments for 4 decades. Been MP for Langata, Prime Minister of Kenya. Member of KANU, Ford, and Ford-Kenya.

“Been leader of NDP and ODM. Been Minister for Roads and Energy. Been AU High Representative for Infrastructure. Shook hands with Moi, Kibaki, and Uhuru. Vied for Presidency in 1997, 2007, 2013, and 2017. You have now done your bit Baba,” Moses Kuria said, finishing by asking Baba to endorse him for the top seat.

Happy Birthday Baba H.E Rt. Former Prime Minister Raila Odinga, As you celebrate your special day, may the Almighty God grace you with many more years filled with sound health and Happiness.

May God grant you more years on mother earth.

May the best rays of the sun illuminate your path

May God's palm of favour be placed on your mind, heart &family

I wish you good health & blessings