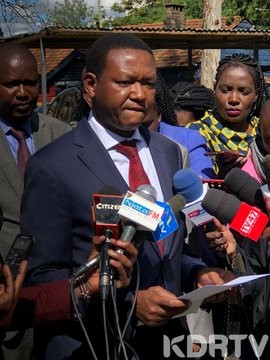 Machakos Governro Alfred Mutua has recorded a statement at the Kilimani Police Station, over alleged death threats from Deputy President William Ruto and his Tanga Tanga factions. The governor said that he has been threatened severally by Ruto. National Assembly Majority leader Aden Duale and his Senate counterpart Kipchumba Murkomen.

While addressing the press from the police station, Mutua said he has brushed shoulders with Ruto at state house where the DP promised to crush him.

“William Ruto, Kipchumba Murkomen, Aden Duale have sent threats to me against my life” he said.

Dr Alfred Mutua addressing the media at Kilimani police station has made public his conversations with William Ruto who told him at statehouse that "He will teach him a lesson" and "Sasa nitakugonga". "William Ruto was angry and held my arm strongly" pic.twitter.com/fnMmNvzSpR

The Maendeleo Chap Chap Party leader said he is being threatened because of his constant attacks on the DP.

Mutua has recently joined hands with ODM leader Raila Odinga. He led a delegation of Ukambani Governors to campaign for ODM candidate in Kibra by-elections Imran Okoth in November last month. Imran was running against Ruto’s candidate MacDonald Mariga. Both Mutua and Raila have promised to work together in the coming general elections.

Last week, reports emerged that Wiper leader Kalonzo Musyoka was plotting an alliance with Ruto . The story was first shared by former Machakos Senator Johnson Muthama, who said that he will lead a delegation of Kamba leaders to meet Ruto’s camp. Despite the fact that Kalonzo denied these allegations, Mutua released a statement saying they will not allow the community to be sold to the highest bidder.

The comments by Former Senator of Machakos on radio this morning on the formation of a political pact between @WiperMovement and DP @WilliamsRuto has not come as a surprise. pic.twitter.com/tfyIfJJ0IZ