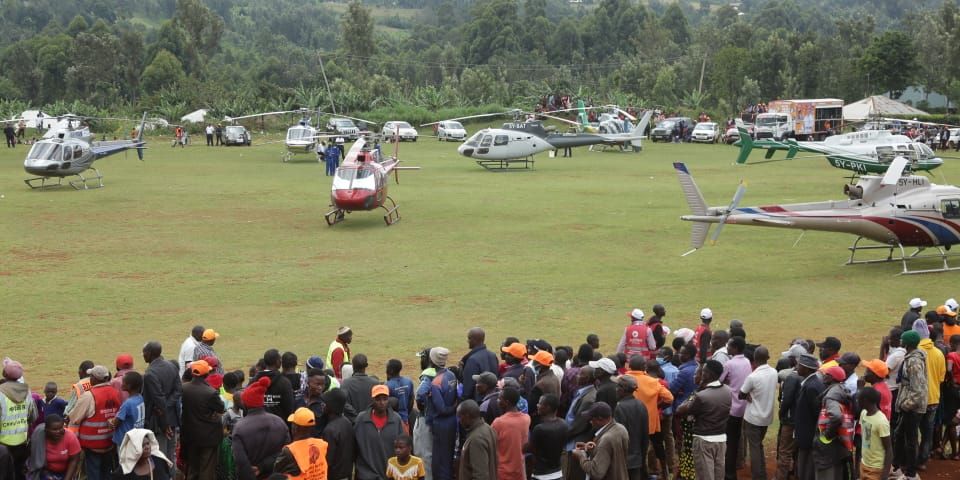 The Azimio la Umoja One Kenya Alliance on Saturday displayed a show of might as Raila Odinga and his running mate Martha Karua landed in Nyamira County with 7 choppers.

The Azimio colors of orange and white were worn by thousands of Nyamira locals who came to welcome  the presidential contender.

Residents were kept away when the helicopters, which had been covered in a massive dust cloud, touched down. Residents battled among others to get closer to the flying machines.

Police had a tough time managing the ecstatic audience, despite the Master of Ceremony’s pleas for everyone to heed safety.

Raila Odinga and Karua ridiculed the Kenya Kwanza manifesto which was unveiled by DP William Ruto on Thursday evening.

The duo stated that it failed to account for how they intend to combat corruption, stressing that a country’s economy cannot grow if it is undermined by widespread corruption.

According to them, the development pledges were comparable to those made in 2017 and are no longer applicable.

Raila solicited support from the Gusii region ahead of the August General Election, stating that he will not disappoint the region in terms of development projects should he win the presidency, of which he is confident.

“We have now come for the third liberation and this time round I want you to stand with me to fight the common enemies, Illiteracy, disease and poverty in our county .Let us all rise up and do away with leaders who are giving false promises,” Odinga said.

Karua criticized the Kisii stadium chaos on thursday where she was tear gassed as she was about to give her speech.

Also Read: Raila Reveals Who Will Qualify for the Ksh 6000 Stipend From the Azimio Goverment