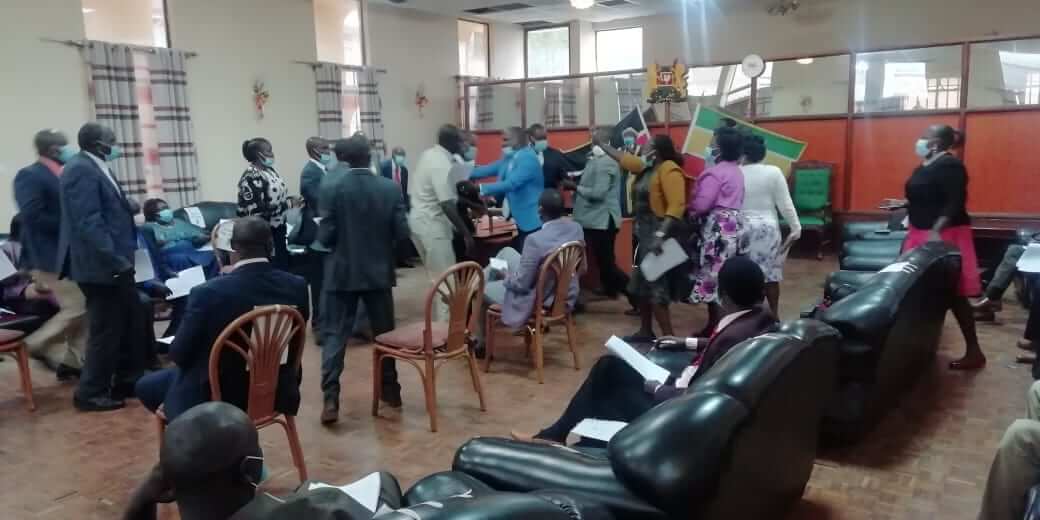 (KDRTV) – Chaos erupted at the Baringo County Assembly on Thursday as MCAs discussed the BBI report.

Videos seen by KDRTV show Jubilee lawmakers clashing with their KANU counterparts as both camps failed to agree on the report.

Jubilee has the majority members in Baringo with KANU contributing a substantial number.

Jubilee members who lean towards Deputy President William Ruto’s camp are believed to be opposing the Bill while the Gideon Moi led KANU members want it passed.

Last week, the Baringo County Assembly Majority leader Lawi Kipchumba claimed that Baringo would be the first county to vote against BBI.

Just as our counterparts in Siaya have rushed to pass the bill, the Baringo assembly will be the first one to reject it. We cannot be blackmailed and sweet-talked. The majority of Kenyans have said ‘no’ to BBI and we have no choice but to reject it,” Kipchumba said.

Siaya and Kisumu have already voted for the BBI.

This comes just a day after Jubilee summoned its MCAs to the party headquarters where Secretary General Raphael Tuju failed to convince them to support the report.

A Jubilee Lawmaker told Tuju to concentrate on his health and stop intimidating lawmakers to endorse the Constition ammendment Bill.

The lawmakers also accused Tuju of trying to intimidate nominated MCAs to vote in favour of the Bill or risk being expelled from the party.

The BBI Bill needs to be endorsed by at least 24 Counties to go to the next level.

President Uhuru Kenyatta has already acceded to the MCAs demand for a Ksh 2 million car grant to endorse BBI.

The BBI also promises to create the ward development fund which will be controlled by MCAs.

With all these sweeteners, MCAs are supposed to have no problem voting in favour of the report.