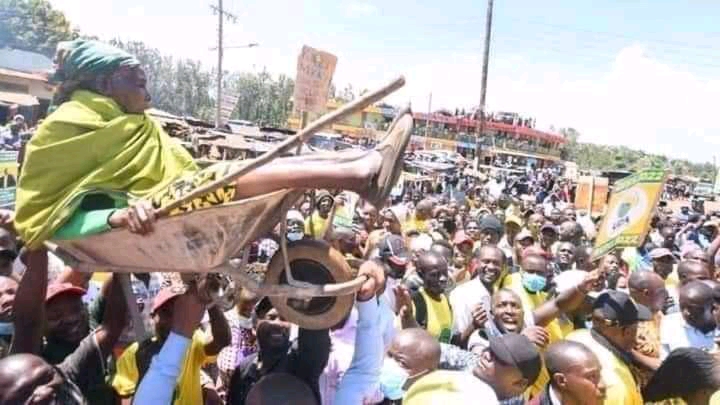 Deputy President William Ruto has fastly rushed into action to pull down a photo of a 96 Year Old Meru woman who was allegedly mishandled by Tangatanga supporters.

At first, the hustler nation head DP Ruto thought it wise to intercept the photo on his social media platforms hoping to garner sympathy support from online gang but things flip flopped leaving bruise attacks both local and international for allegedly cornering underprivileged old people in the society for his own political gain.

The bottom up chief crusader was subjected to intense online criticisms and torture from Orange Democratic Movement (ODM) stalwarts after a photo of an old woman being thrown into the air while uncomfortably swaying on a wheelbarrow caught the attention of Raila’s footsoldiers on social media.

Deputy President William Ruto was addressing thousands of hustlers in Embu county where he had camped for seven days while painting and installing United Democratic Alliance’s (UDA) bottom-up narrative into people’s hearts, when a battery of wild crowd were seen tossing an old woman on a wheelbarrow who seemingly wanted to engage DP Ruto in person.

This wrapped a score of insults and hates from handshake axis (ODM and Jubilee) directed to DP Ruto.

“This is a total disgrace. Both Deputy President William Ruto and United Democratic Alliance (UDA) party ought to be ashamed of themselves. They need to exercise common sense and exhibit basic decency and respect for women and elderly in their ungoverned greed to capture state power” US based professor Makau Mutua unleashed bullets at DP Ruto.