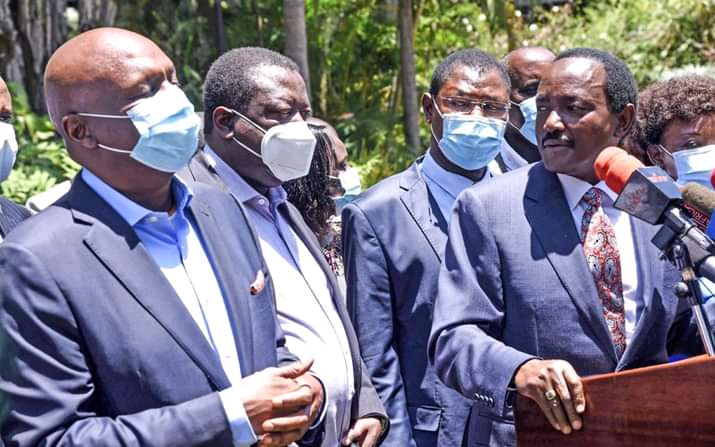 One Kenya Alliance (OKA) chief partners have called for a crisis meeting on Tuesday, 30th, November, 2021 to iron out the fueling rifts among its legislators.

The meeting’s agenda is to outwash the grifting accusations and counter-accusations following the alleged claims that some of the principals in the grouping are secretly holding negotiation talks with their key opponents (Raila and DP Ruto) as away of holding their political cards tightly on the chest ahead of 2022 general election.

Amani National Congress (ANC) Deputy Party leader Ayub Savula who doubles as Lugari MP also dropped tantrums at Malala claiming that he (Malala) was hustler nation hireling and it was just a matter of time before Malala announces an abrupt shift from OKA to Tangatanga camp.

KANU party Secretary General Nick Salat revealed that the grooming suspicions in One Kenya Alliance will be tabled and iron out the differences to clear the rising animosity that could threaten to topple OKA outfit.

“We must frankly discuss and iron out these issues arising out of suspicions. One Kenya Alliance team need to move together  by ending the trend by some people treating others as lesser partners. All these issues will be tabled and openly discussed. This is the top agenda of today’s meeting” Nick Salat said.

“Though his utterances and operations have become a disgrace and of much concern to One Kenya Alliance, we will not waste time discussing an MCA who rose from nothing to clinch to senatorial post. There are more urgent matters to talk about. But Malala should just walk out and go to where his heart belongs,” Ayub Savula said.