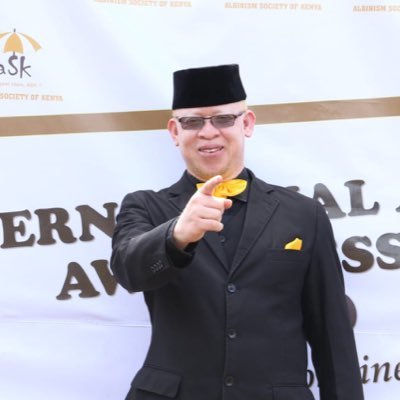 Nominated senator Isaac Mwaura has opened up on the challenges of growing up with albinism saying they started right after he was born.

The politician, speaking with Metha Ya Kagoni on her Youtube channel, revealed that his father rejected him after birth because of the colour of his skin.

“When I was born and my dad saw me in the hospital he said he cannot have a child who looked like a pig,” he said.

“My mum was in a relationship with my dad but they were not married. People did not come to see me because I was born but because was an albino. People never thought I would grow up.”

Mwaura went on to share that his father was even convinced that his mother cheated on him with an Indian guy who got her pregnant.

“People even said my mum had been unfaithful and had a relationship with an Indian,  so it was assumed the guy fathered me,” he revealed.

“At the time my mum used to work for her uncle before she landed a job at a chalk company run by a muhindi. I was brought up by my mum and my grandparents.”

The MP, who represents Persons with Disabilities and is the first MP in Kenya with Albinism, said that his father went on to ditch them which made things tough growing up.

“I thought I would grow up and become a woman because I never grew up with my dad around,” he said.

“I was surrounded by women. Plus my mum over pampered me and it was not a very good thing. I was also a bright kid so I was told to read while my brother and cousin did the other chores. God gives kids grace, they are oblivious of such happenings. My family also loved me very much and that gave me strength.”

Watch the interview below: