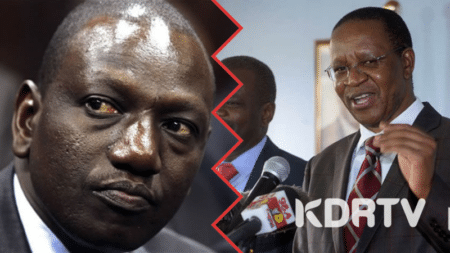 While appearing on Citizen TV on Thursday August 4, Kibicho Kibicho refuted allegations that he attended night meetings at the Nakuru State lodge to organize the distribution of leaflets in the Rift Valley region.

He called the DP a liar for stating that he had not visited Nakuru county in the past two years. Kibicho also questioned why the leaflets appeared days after Ruto’s rallies in the region.

“Those statements are as useless as they come. We are mandated to provide security to Kenyans. What motivation would the government have to cause panic among Kenyans? To achieve what? How do you scuttle elections in favour of Raila Odinga by spreading leaflets?

“We cannot be reckless about security in this country by calling press conferences and attempting to cry. We are more serious than this. We are talking about protecting the lives of Kenyans,” Kibicho stated.

In addition, the PS stated that investigations into the flyers were ongoing and that those guilty will be held accountable.

However, he criticized the DP for addressing the concerns at press conferences rather than through the proper channels. Kibicho stated that Ruto has not contacted him despite the fact that he is his boss.

“When you hold a position as big as the DP of a country, try and persuade yourself to be truthful, it is the honourable thing to do.

“He is speaking as if we were there planning things. It is shameful to lie on cameras on such a grave thing,” Kibicho added.

Kibicho’s remarks comes days after 8 people were arrested in Rift Valley over the violence leaflets.