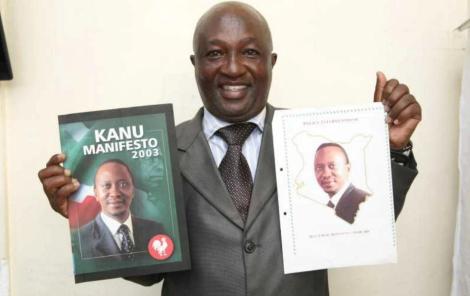 Uhuru Kenyatta’s Kiswahili skills were not always as strong as they are now. It took a few lessons for the outgoing Kenyan President to grasp the language.

In the run-up to the 2002 General Elections, when Uhuru faced retired President Mwai Kibaki, a primary school teacher named Kefa Ng’ang’a was hired to teach him Kiswahili so that he could not only communicate with, but also appeal to ordinary Kenyans.

Former Information Permanent Secretary Wamatu Njoroge approached the Kiswahili teacher after he spotted him when presiding over a prize-giving ceremony in Gatundu, Kiambu County.

Njoroge was pleased with Kefa’s Swahili prowess and offered him a job on the Uhuru Kenyatta presidential campaign team.

Kefa’s main role was to polish Uhuru’s Swahili so that he could address the public.

Four times a week, Kefa would go to The Chancery Towers on Valley Road, where Uhuru’s office was, and meet with the president for courses.

However, because of Uhuru’s rigorous campaign schedule, their timetable altered from time to time.

Uhuru, according to his Swahili teacher, was a cooperative student who picked up new phrases quickly.

Kefa would write Uhuru’s speeches in Swahili and hand them over to Njoroge, who would double-check that they were accurate and well written.

The communication team would point out areas that Kefa would pay attention to in future classes as well as evaluate Uhuru’s performance.

However, after Uhuru lost the 2002 General Election and the death of Njoroge, Kefa lost contact with him.

During an interview in October 2020, the Kiswahili teacher stated that he wants to meet the head of state before his tenure ends after the August 9 elections.