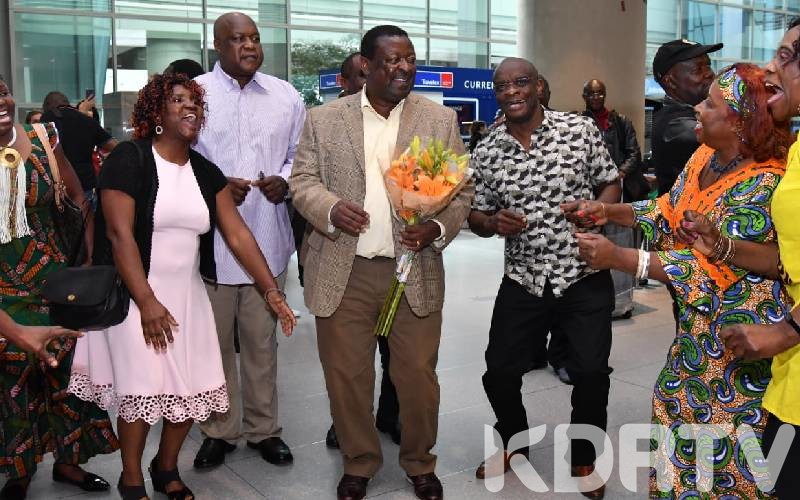 Amani National Congress (ANC) Leader Musalia Mudavadi has embarked on a two week tour to the United States  in a bid to popularize his 2022 agenda and strategize politically.

The two week tour was commenced on Thursday where he was accompanied by three ANC members of parliament, including the Secretary General Barack Muluka.

He is expected to hold lectures at different universities and to meet with the Kenyans in diaspora on a face to face level to discuss the challenges they face while outside the country as well as how to address them.

According to the Secretary General Barack Muluka, the ANC leader has counted the Kenyans in diaspora as part of his 2022 campaign strategy, as he pledged to include them into his government.

Among the delegation that accompanied Musalia was Sabatia MP Alfred Agoi who narrated that the tour was also focused on wooing investors into sponsoring the campaigns ahead of 2022 elections.

Musalia Mudavadi has often been the lapdog in the Kenyan politics, merging with different politicians and agreeing to take the second slot of the DP in case of win only to be played and tossed aside.

For instance, he was allegedly used and dumped by the Uhuru-Ruto train during the 2013 elections and the merge with NASA coalition has hit a dead end since he is accused of betrayal in Kibra race.

The Luhya kingpin however has decided to remain a one man army by making his 2022 ambitions clear, adding that he would not beg anyone to support his agenda.

“This time I will stand alone and concur through, I will not beg anyone for support to achieve my 2022 top seat plan,” said Musalia.

"I’m standing here to say yes, I’m looking for that opportunity to serve as the president of Kenya. Our team is growing and we want you to be part of that team. Let us walk together."

READ ALSO: DP Ruto Has Nothing New To Offer Me Apart From A Corrupt Administration, Says Mudavadi.

Before the US tour, Musalia had orchestrated a country wide tour to popularize his party as well as campaign for his candidate Eliud Owallo in the Kibra election race.

He has been very vocal lately in the media, making stances that have seen him criticized and labeled a betrayer.

According to ODM party, NASA was a family and Musalia should not have fielded a candidate for the Kibra by-elections.

The leaders saw him as a traitor having betrayed the NASA pact and putting his selfish interest first. However, Musalia refuted the claims asking leaders to stop tainting his name over propaganda.

“I do not owe anyone political allegiance. my party’s candidate was unveiled as it is his constitutional right. Leaders should refrain from cheap propaganda aimed to only taint my name,” said Musalia.

READ ALSO: Kibra Is Not Raila’s Bedroom, Lashes out Mudavadi.

With the Kibra race at stake, the impending 2022 General elections are anticipated to be a tough race, since candidates have already embarked on early preparations.

Corruption is rife, unemployment is high and our national debt has skyrocketed, but there is hope. We can turn it around, we can do something to create jobs, we can reduce our public debt to manageable levels, we can do it by making sure that the right leadership is in place. pic.twitter.com/nQybhZu3Ni