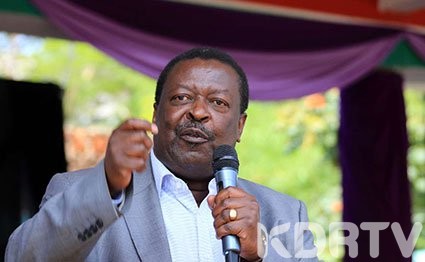 According to Musalia, one does not need to drop their citizenship in order to qualify for state jobs.

He has called upon the government to amend the law whilst promising Kenyans in diaspora change and a fight for the rights.

Musalia began his two week tour last week, with the agenda of popularizing his party (ANC) and re-energizing for 2022 General Elections.

Speaking yesterday during one of his meetings in New Jersey, Mudavadi asked the Independent Elections and Boundaries Commission (IEBC) to set up proper mechanisms that will ensure all Kenyans in diaspora exercise their voting rights.

“It is startling that the law should ask you to drop one of your citizenship in order to play a role in your motherland. This needs to change and all Kenyans accorded equal rights,” said Mudavadi while addressing Kenyans living in New Jersey.

The Kenyan constitution on article 78(1) states that a person is not eligible to compete for an election or state job unless he/she is a Kenyan citizen.

The sub-section two ideally enforces the law by stating that a state officers and defense forces should not hold dual citizenship.

Mudavadi’s pledge hence in aimed to elevate the lives of Kenyans in diaspora as well as give them a chance in leadership and state representation.

Musalia Mudavadi slams dual citizenship law: The ANC leader says all Kenyans are entitled to full enjoyment of civil rights regardless of their citizenship status. https://t.co/fTJzSNlQIG

According to the Central Bank of Kenya statistics, the Kenyans living in diaspora produce up to Sh2 billion annually.

These remissions have played a huge role in building the country’s economy as well as steer growth and National agendas.

Mudavadi asked the government to involve the people living in diaspora in their manifesto since they play huge roles in the generation of the country’s Growth Development Profit (GDP).

“Kenyans in diaspora play a huge role in the economy. They should be given equal rights and measures speeded up to ensure and guarantee their rights are protected,” said Mudavadi.