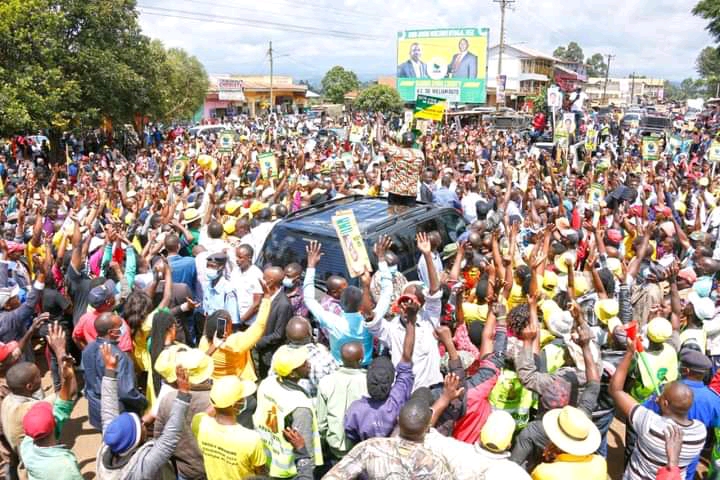 Speaking during United Democratic Alliance (UDA) political campaigns at Ena market in Embu county, the hustker nation head who was flanked with Mathira MP Rigathi Gachagua, Murang’a Senator Irungu Kang’ata, Kiharu MP Ndindi Nyoro, Malindi MP Aisha Jumwa among other Tangatanga key legislators chided that his competitors ought to restructure and re-strategize their campaign model for them to pull a heavy wave that might topple United Democratic Alliance (UDA).

“Our competitors are too weak to beat us in the next presidential election. And if the vitendawili man who invaded our Jubilee party with intention of scattering our prior plans of resuscitating the country’s economy through big four agenda is the person I will compete with, then we shall win presidential seat before even 8am in the morning” DP Ruto said.

He stated that hustler nation supporters who were left in the cold after the disintegration of Jubilee party have now acquired a new home, United Democratic Alliance (UDA) where all their interests and financial tortures will be promptly dealt with.

Ruto also hinted that the unaccomplished Jubilee party projects which had not been addressed will be transferred to hustler nation camp and spear them into the bottom-up economic model which targets to financial pleasure to small scale business owners and local traders in the attempt of expanding micro and medium business enterprises.

“I have re-assured my boss President Uhuru  that the unaccomplished Jubilee projects and the big four agenda will bw channeled to the hustler nation camp and promptly tackle them through the bottom-up economic model. Hustler government will allocate more than Ksh50B for small scale business traders each year” Ruto added.