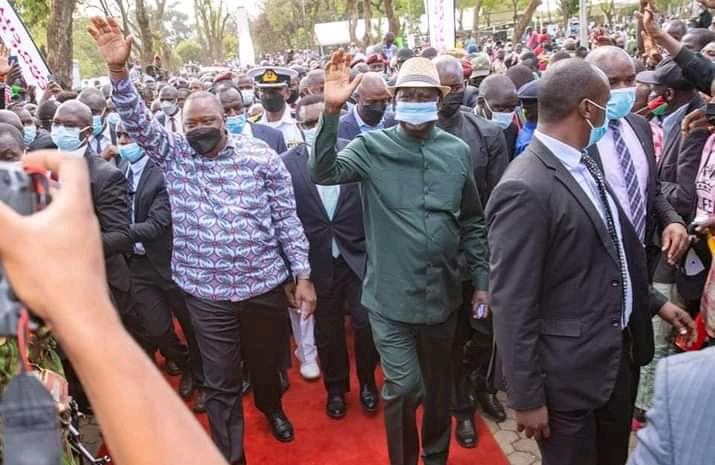 The Head of State President Uhuru Kenyatta has landed in Tanzania to grace the 60th Anniversary of Tanzanians (Tanganyika) Independence Day Celebration that is being held at Uhuru Stadium in Dar es Salaam.

Uhuru will kick off his two-day tour in Tanzania by holding bilateral negotiations on the trade units that will culminate in signing a raft agreement between Kenya and Tanzania as a schemed attempt of resuscitating the two countries’ economies.

He will also address the state of Tanzania on the elimination of the travel barriers at the borders of the two countries (Kenya and Tanzania) which were imputed by the late John Pombe Magufuli in March.

This Independence celebration marks the first National ceremony that has been presided over by President Mama Suluhu who resumed the office upon the untimely demise of the late Magufuli.

Uhuru and Mama Suluhu will be holding bilateral negotiations for the second time after Mama Suluhu toured Kenya few months ago to sign fresh agreements that will erase the glued wrangles between Kenya and Tanzania.

Uhuru’s Tanzania tour has dealt the ODM party leader Raila Odinga a huge blow as he (Uhuru) will miss the much hyped heroic declaration at Kasarani that is scheduled tomorrow, Friday, 10th December.

Raila has invited international leaders, Notable National leaders and ODM delegates from all walks across the country to witness the long awaited verdict at Kasarani.

This comes a time when President Uhuru Kenyatta’s allied Mt Kenya Foundation tycoons endorsed Raila’s presidency, yesterday, Wednesday, expressing confidence in his leadership plans that will serve and protect the interests of the people of Mt Kenya region. Uhuru’s absence in Raila’s event might ignite controversial opinions from political pundits in ODM faction.