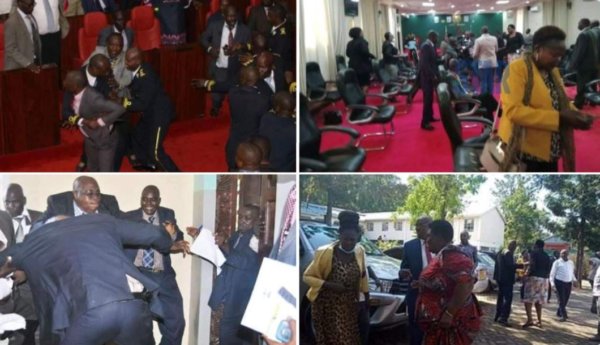 (KDRTV) – An attempt at Governor Okoth Obado’s impeachment turned chaotic yesterday. The embattled governor is not in good books with his party, Orange Democratic Movement (ODM). The party leadership decided to throw him under the bus after his arrest and subsequent release by Ethics and Anti-Corruption Commission officers.

Obado and his children are accused of embezzling KES 73.4 million during his first term in office. The case has been haunting him for some time now. When he was released on bail after his most recent arrest, ODM chairman John Mbadi and Secretary-General Edwin Sifuna released a statement. The statement was calling upon the Migori County Members of County Assembly to come up with an impeachment motion against Obado.

READ ALSO: Senator Sakaja Shocks Raila And DP Ruto As He Reveals Who He Will Support For Presidency In 2022

It looks like the MCAs are sharply divided as to whether Obado should be impeached or not. There are those who are loyal to the party. Others are very loyal to their governor. When they had a sitting yesterday, things did not go well. Several blows were exchanged and objects thrown left, right, and centre.

Several Migori MCAs seriously injured as the Assembly descended into chaos and fist fight over Governor Okoth Obado's ouster. Raila and his terrorist organisation called ODM represent chaos and violence, no wonder he has never won any election and he will never ever be President. pic.twitter.com/ofClUjTmmD

Several of them were injured badly. One wonders why they always have to fight to pass their points across instead of simply voting.

Those opposed to Obado’s ouster claim double standards on the side of Raila’s party. When Waiguru was impeached by her Kirinyaga County MCAs, the ODM wing was extremely aggressive while defending her. Their cases are almost similar. They are both accused of corruption. But when it came to Obado, the ODM leadership appeared to be too quick in calling for his impeachment.

The fact remains that the Migori governor has a lot of support in his county. When he was denied the ODM ticket in the 2013 gubernatorial race, he shocked Raila by his landslide victory on a PDP ticket. The guy is a fighter. Maybe he might join national politics in future now that this is his final term as governor.