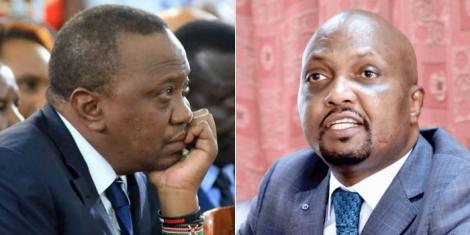 Chama Cha Kazi party leader Moses Kuria has chastised President Uhuru Kenyatta after he went on a rant at his deputy William Ruto over not helping him in his second term.

The Gatundu South MP in separate posts on his facebook account told Uhuru why Ruto failed to work with him citing interference from the Kenyatta family.

” How did you expect him to perform  when your family and cronies stood in the way of every effort to solve Hustlers problems ?” Kuria posed.

He went on to tell the president about his 2013 manifesto saying that he too should have implemented his manifesto since he was a powerful government official in Kibaki’s tenure.

Kuria noted that Uhuru has failed to deliver the promises he gave to Raila that he would deliver him votes.

” Your delirious ranting is the only thing you can offer Tinga to assuage his foolish supporters who are now laughing not knowing its a cover up for the fraud you committed on him. You promised him votes which is now clear you don’t have. You promised him “System” which is becoming succinctly clear that you don’t have to a point now am increasingly desperateTinga wants IEBC to use a manual register. ” Kuria added.

The head of state had earlier took a jibe at his deputy  for allegedly abandoning his duties midway through the Jubilee government’s tenure and instead making pledges to the voters about things he should have done while still in power.

Also Read: Uhuru Reacts to Ruto’s Manifesto, Tells Kenyas What to do in August 9