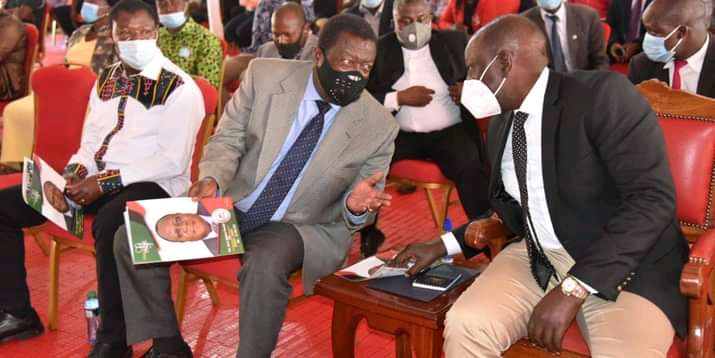 According to the Star Newspaper, Orange Democratic Movement (ODM) party principal, Wiper Party leader Kalonzo Musyoka and KANU supremo Gideon Moi have confirmed that they will attend the Jubilee’s NDC meeting while the rude and vigilant short-term former vice president Musalia Mudavadi’s attendance to the aforesaid planned NDC is yet to be given surety.

Amani National Congress head has remained vigilant and unmoved re-emphasizing that he will walk tall and open the Pandora box of his presidential luck in 2022. In the wake of the ongoing disquiet murmurs on President Uhuru Kenyatta’s corridor plans to endorse ODM party leader Raila Odinga as his successor, the bitter Musalia Mudavadi who has been owing to the fact that he expected president Uhuru Kenyatta to stamp his bid, has heightened bruise and frosty political relationship with his former NASA partner Raila Odinga. It is openly evident that he (Mudavadi) believes that it was the former premier Raila Odinga who rushed to forge lighter terms with Uhuru this blocking his glowing endorsement star.

On the other political revelations, political pundits have for umptheenth times exuded that the tactful President Uhuru Kenyatta might be grooming behind the scene node to trim United Democratic Alliance (UDA) party leader William Ruto going by the fact that he (Uhuru) has maintained hi cards on the chest not to attack DP Ruto publicly despite the ongoing push and pull strings in UDA.

Uhuru has also played his game safe by not taking Orange Democratic Movement (ODM) party leader Raila Odinga to climb the mountain in person and this has exposed DP Ruto to a political bonga of crushing ODM terribly after strengthening hustler nation networks since 2018. Lest we forget, DP Ruto publicly revealed that president Uhuru Kenyatta instructed him to start early campaigns in 2018 to clear the hurdles on his State House path ahead of 2022.

Owing to the above political stages, there might be possibilities that the head of state president Uhuru Kenyatta is secretly pushing Musalia Mudavadi to join DP Ruto’s UDA camp to form formidable coalition that will reduce Raila’s chances of taking the country’s top seat in 2022.