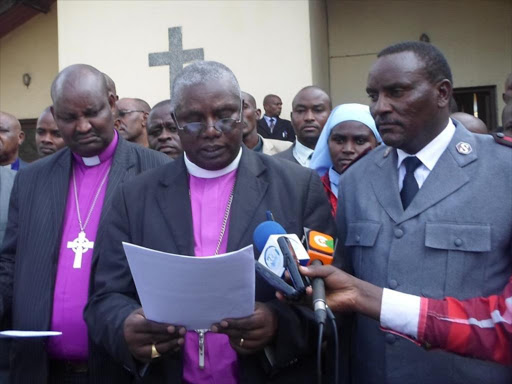 Religious leaders have urged President Uhuru Kenyatta to avoid being part of succession politics and to let Kenyans elect their preferred candidates independently.

According to a statement read by Mombasa Catholic Archbishop Martin Kivuva, the religious leaders noted that President Kenyatta’s involvement in succession politics could jeopardize the unity of the nation ahead of the August 9 general elections.

“We have committed to reach out to His Excellency President Uhuru Kenyatta and appeal to him to disengage from succession politics. The president is the symbol of national unity as provided for in the constitution. He should remain above partisan politics, recognizing he is the President of all Kenyans,” said Kivuva.

“Feelings and expressions from Kenyans display a concerned lot. Most of them are actually urging our president to see a way of how he will balance both succession and his legacy.” the Mombasa Archbishop added.

The sentiments by the clerics come at a time when Uhuru is championing for his handshake partner Raila Odinga to succeed him as the next head of state.

Last year, when granting Nakuru county legal city status, President Kenyatta rallied around the ODM leader, characterizing him as a statesman with the ability to govern the country. The Mt Kenya Foundation, a group of wealthy Kenyans aligned with the President, has also thrown their support to the ODM leader.

The Clerics also raised reservations about the country’s readiness for the approaching elections.

Kinyanjui stated that Parliament must work quickly to assure the passage of the Campaign Financing Amendment Bill, the implementation of the two-thirds gender rule, and the political primaries bill, all of which are essential for the August 9 polls. The group also claims that the election administration institutions, led by the Independent Electoral and Boundaries Commission, are impeded and cannot execute their mandates properly.