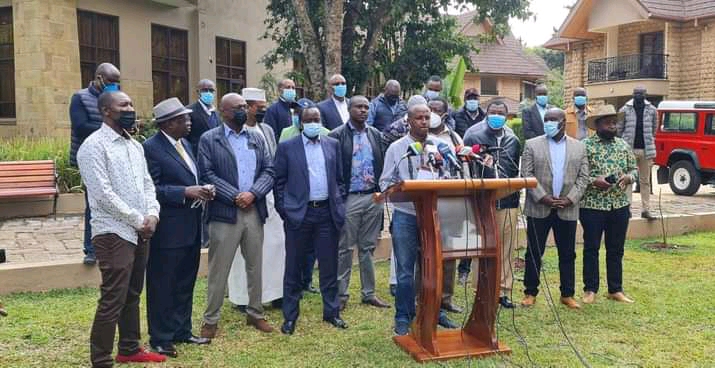 The two fierce lawmakers announced their official exit from Ford Kenya party citing mistrusts from Wetangula’s faction after the coup plotted to purge out Wetangula from party’s head seat failed.

“We all know that 2022 general election is around the corner and we have resolved not to engage our rivals in court battle that is not helpful” Wamunyinyi noted.

They informed that they will establish their next step and unveil the party which they sail through on 14th December 2021 for 2022 pre-election preparations.

“We will unveil a new party during our NDC on December 14. You will shortly know the details of our new outfit,” Wamunyinyi added.

This emerges a time when the Tongaren MP Eseli Simiyu accompanied the Cabinet Secretary Eugene Wamalwa in Bungoma for streams of rallies and electorates mobilization ahead of 2022 general election.

While addressing Bungoma residents, Eseli revealed that Wetangula’s Ford Kenya had excommunicated them from the party owing to their untwisted move to make party changes and topple Wetangula from party head’s post.

“When a mad man snatches your clothes when you are taking a bath in a river, you don’t follow him naked. You cover yourself with leaves and find new clothes,” Eseli informed.

Wamunyinyi and Eseli fallout with Wetangula after influential leaders allied to Wetangula’s axis started showcasing some political notices of supporting Deputy President William Ruto’s 2022 presidential bid. Eseli and Wamunyinyi who are believed to have received unwavering support from Defense CS Eugene Wamalwa vowed to conjoin their support to Raila’s bid.