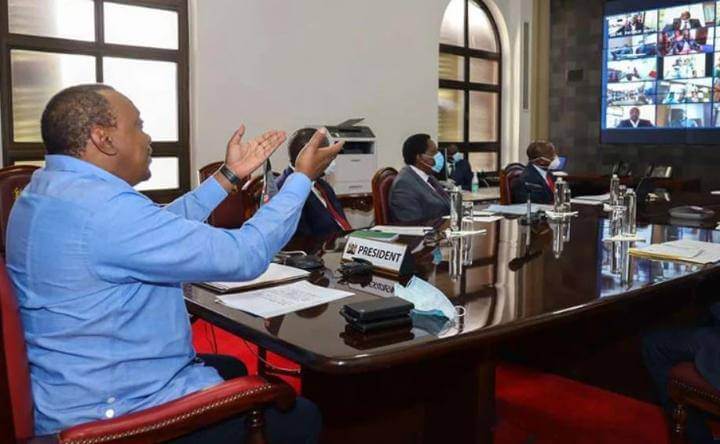 (KDRTV) – Kenya’s National Social Security Fund (NSSF) chairman, General Julius Karangi, has become the first Kenyan to walk out of the President Uhuru’s meeting after the Head of State gave orders that money is transferred to a different account.

The National Social Security Fund has billions of Kenyan shillings in its accounts since it is the body that is responsible for the collection, safekeeping, investment, and distribution of retirement benefits of employees in both the formal and informal sectors of the country’s economy.

Controversial blogger and social media activist, Robert Alai, has revealed how President Uhuru Kenyatta recently stormed into the board meeting of NSSF and ordered the Managing Trustee to hand over money to his chosen company so as not to fail his ambitious housing plans.

But it looks like Julius Karangi, who is the chairman, had other ideas as he refused to hand over the money and stormed out of the meeting saying the President wants him jailed. He could not risk going to jail for making an obvious mistake.

“So recently, President Uhuru stormed NSSF meeting through Zoom and ordered the Managing Trustee to hand over money to his chosen company so as not to fail his housing plans. The guy already knows that he’ll release money then he’ll be charged and arraigned for corruption. He had to say a capital NO,” Alai revealed.

“General Julius Karangi stormed out of the Zoom meeting and asked the Management to deal with the President. The management knows very well that if they sign money off, no ground-breaking will be done and money will be eaten. They will be then be arrested and charged with corruption. Haki yao!” Robert Alai added.