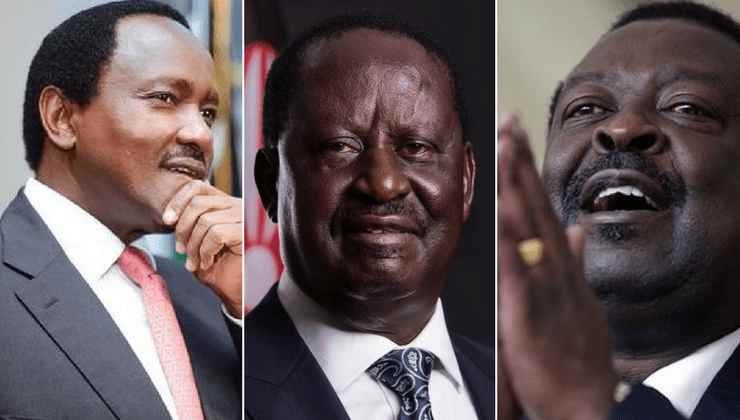 One Kenya Alliance principles Musalia Mudavadi and Kalonzo Musyoka appears to have reached the conclusion that the August 9 presidential elections will go into a run-off.

The two former vice presidents appear to have agreed that they will negotiate with Raila or Ruto after the elections move into a run-off.

This is because DP William Ruto and ODM leader Raila Odinga are acting as if they have already won the election. They are not paying attention to the OKA members, who they desperately need to win the first round.

According to political analyst Prof Joseph Gitile Naituli, the Jubilee administration has not fulfilled most of its grandiose promises and therefore Kalonzo and Musalia have a chance of keeping votes away from DP Ruto and Raila Odinga.

“I think Kalonzo and Musalia stand to keep the votes away from Raila and Ruto in the areas where they have a following.’’ Naituli says.

The Multimedia University don goes on to say that, President Kenyatta’s plan of defeating DP William Ruto might be backfiring as he had wanted regional Kingpins to stop the second in command from succeeding him.

‘’In other words, President Uhuru Kenyatta’s formula for defeating DP Ruto is backfiring on him. He wanted the regional groupings to deny Ruto the win, but now they appear to be working against him.’’ Naituli notes.

Raila Odinga’s Azimio la Umoja team, according to the Professor, is not looking at things properly if they are betting on Mt Kenya region to support the former Prime Minister wholly.

Naituli advises the ODM leader to stick with his ex allies Kalonzo Musyoka and Musalia Mudavadi if he wants to be president.

‘’Central is the most unreliable voting bloc when they don’t have their own candidate. This is a group that has never voted outside itself since Independence. To imagine they will be so fired to manage 70 percent is to overreach.’’ He adds.