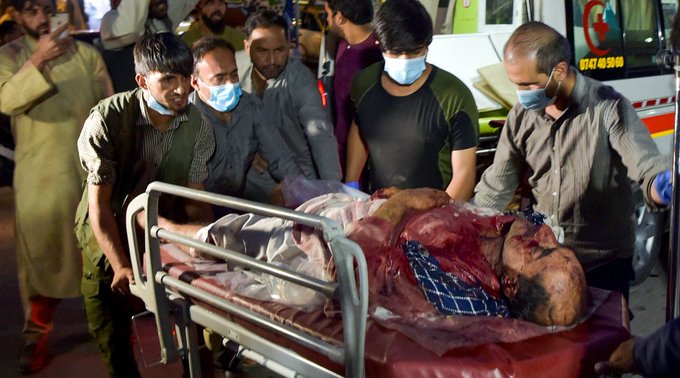 LIVE UPDATES: Senior Afghan officials have reported that at least 70 people have died while 140 others were injured following the twin bomb attacks outside Kabul Airport.

Civilians and US troops among dozens killed in Kabul bomb attack

The Pentagon has announced that it believes that ISIS carried out the attack.

BREAKING NEWS: The Pentagon announces that it believes that ISIS carried out today’s explosives attack near Kabul Airport. Trump claimed that have “defeated ISIS” over a dozen times. RT IF YOU THINK THAT TRUMP IS A LYING IDIOT!

The UK Prime Minister Boris Johnson has condemned the attack.

I utterly condemn the barbaric terrorist attack in Kabul in which Afghans and members of the US military lost their lives.

The threat of terrorist attack is one of the constraints we’ve been operating under, but our evacuation effort continues with over 12,000 extracted so far. pic.twitter.com/DXCFPj9KQC

The twin bomb attacks have just occurred hours after the head of the Taliban, during an interview, said that they would never let terrorists use the country as their base.

The US and allies had projected that a severe attack was about to occur in Kabul airport.

This came days after the Taliban leaders urged the US to stop encouraging the Afghans from leaving the country.

Some Afghans were reported barred from accessing Kabul airport.

About 90 000 Afghans have fled the country after they fear the implementation of severe Taliban Islamic laws.

The UN Secretary-General Antonio Guterres have also condemned the attack

"The incident underscores the volatility of the situation on the ground in Afghanistan," UN Secretary General Antonio pic.twitter.com/pUdlR0yOgc