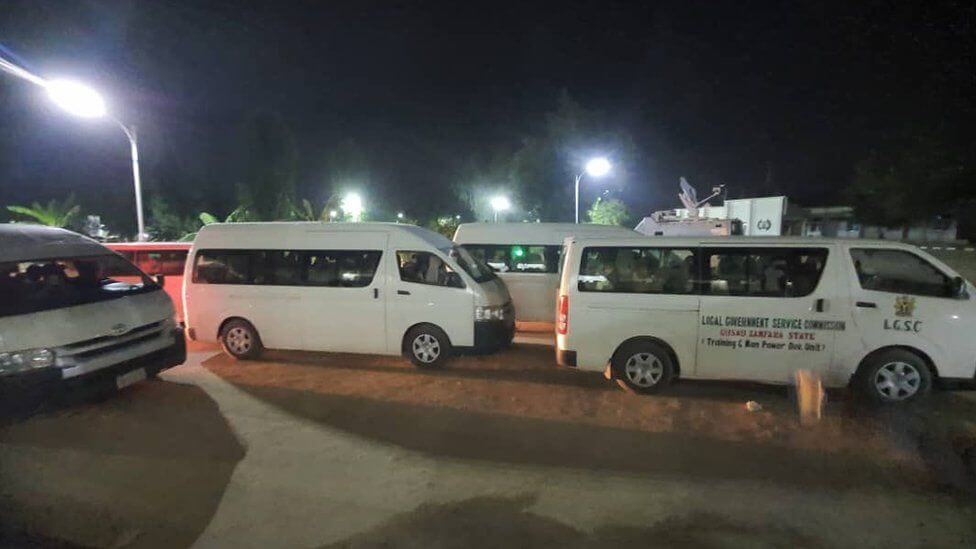 Girls being transported by government vehicles

(KDRTV)-Hundreds of Kidnapped Nigeria school girls from Zamfara Estate have been released by the gunmen, officials reports

KDRTV reported earlier that the girls were abducted by unknown gunmen from their boarding school in Jangebe, Zamfara state on Friday and were taken to the forest

The state government said that hundreds of girls had been free and the girl was safe.

KDRTV confirmed that girls were seen gathered at a government building in Zamfara.

“It gladdens my heart to announce the release of the abducted students… from captivity”, Governor Bello Matawalle wrote on Twitter.

“This follows the scaling of several hurdles laid against our efforts,” he added. “I enjoin all well-meaning Nigerians to rejoice with us as our daughters are now safe.”

Government authorities said that 279 girls have been released saying that the police report that 317 girls were kidnapped was inaccurate.

The girls were released after negotiations with the gunmen

However, the authorities said that no ramson was paid for their release.

However, KDRTV understands that Nigerian authorities rarely admit to paying ramson to kidnappers.

So far the governor has tweeted photos of his meeting with freed captives.

It is not clear whether the schoolgirls we sexually assaulted or not.

Kidnnapping is an emerging severe threat in Nigeria.

All the victims have been freed after negotiations with abductors.