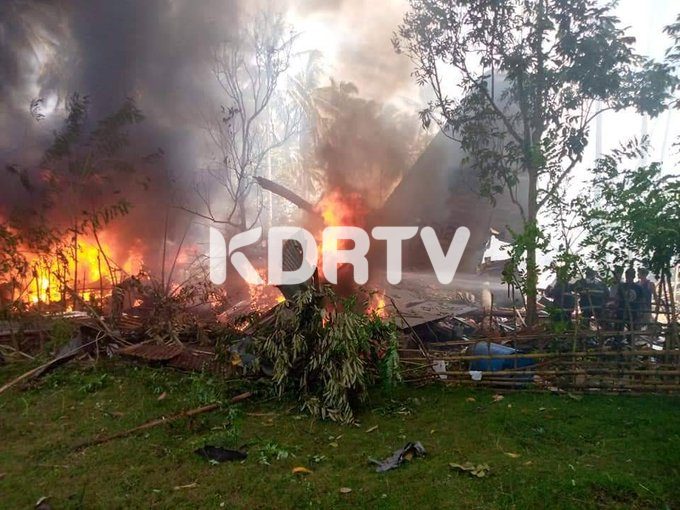 KDRTV NEWS: Philippines armed forces have said that their military plane has crashed with more than 92 people on board in the South of the country.

More than 40 survivors have been rescued and have been rushed for urgent medical attention, reported armed forces chief Cirlito Sobejana.

The aircraft C130 Hercules crashed while trying to in Jolo island in Sulu province but unfortunately overshot the runway.

Reports indicate that seventeen bodies have been recovered from the crash site at Patikul.

Witness report seeing a heavy cloud of smoke and flames from the wreckage.

The plane that carrying troops believed were from Cagayan de Oro, on the southern island of Mindanao crashed at 11:30 local time (03:30 GMT)

“It missed the runway, trying to regain power but it didn’t make it,” Gen Sobejana told reporters.

Reports indicate that the troop was part of the step-up presence in the southern Philippines to combat Islamist militants such as the Abu Sayyaf group.

The state news agency posted images of the crash site revealing wreckage on fire in a wooded area close to a number of buildings.

LOOK: The C-130 crash site in Patikul, Sulu on Sunday (July 4, 2021). The aircraft was on a troop transport mission, according to AFP chief Gen. Cirilito Sobejana. | via Priam Nepomuceno (📸: courtesy of Bridge Bridge, PTV) pic.twitter.com/aVlGfs43f7